What is a Cabochon? – Gemstone Cuts Explained by the Experts

What does Cabochon mean?

A cabochon gemstone features a polished domed surface in contrast to a faceted cut. Rather than sparkle, Cabochons captivate by enhancing colour, reflection or translucence over a domed surface.

The dictionary definition describes a precious stone of convex hemispherical or oval form polished but not cut into facets.

What is a Cabochon gemstone?

For this reason, we’ve put together a few words, keeping things simple. Hopefully, this will give a little insight into this beautiful cut of the gemstone.

Many types of gemstones feature the Cabochon style of gem cut. We rarely cut diamonds in this way since the true beauty of a diamond becomes exposed by careful faceting of the surface to work with finely balanced proportions.

Many examples feature a flat base for ease of setting this gemstone cut. Cabochon style gems make transparent, opaque and semi-opaque gemstones with an altogether unique variation to the flash of light created by faceting the gemstone. 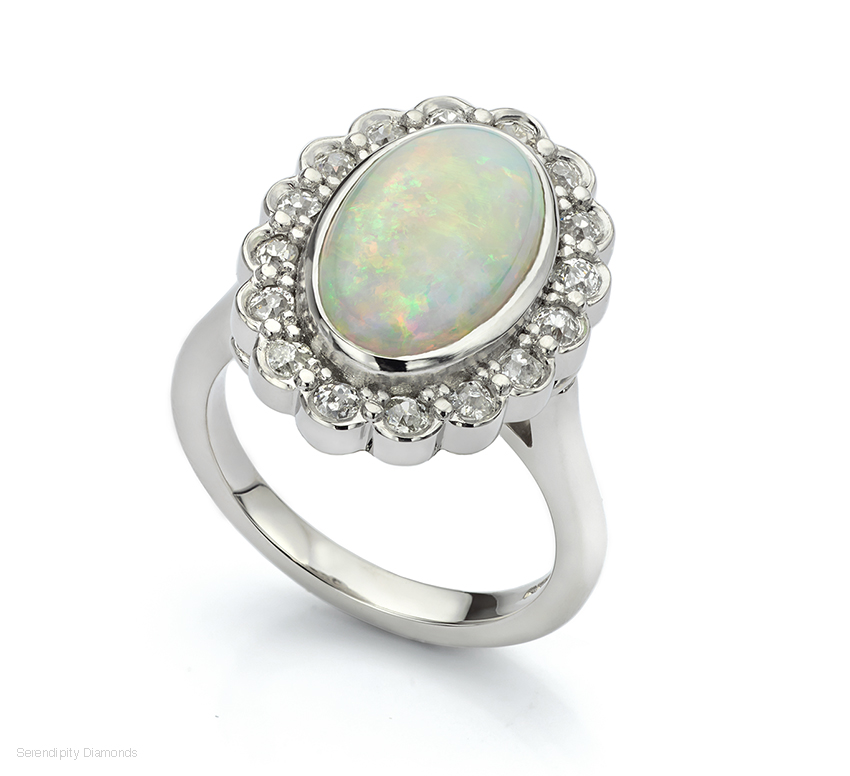 Cabochon Opal and diamond ring, re-modelled from an heirloom ring.

This cut of a diamond has been found across jewellery dating back to the Ming Dynasty and across other ancient culture, including examples from the ancient civilisation of Egypt. Polishing such stones as Sapphire, Emeralds and Rubies, provided deep pools of vibrant colour to the jewellery of Royalty, such as those seen on the Crown of Ottonian Empress Kunigunde, from Germany featuring raised Cabochons set on arcaded panels.

Cab gemstones suit many ring styles. For example, Dress Rings. Other styles include Signet rings for both men and women. A domed gemstone suits a bezel setting on the face of a signet ring. Furthermore, the polished surface of the ring helps to reflect light back through a translucent gem.

What about cabochon diamonds?

Dome polished diamonds don’t tend to exist for a very specific reason. The allure of diamonds comes from the refractive and reflective qualities of diamonds. Such qualities are enhanced through shaping the diamond. Specific proportions and faceting styles result in the sparkle that diamonds are famous for. The shape would destroy all such life from the diamond. Coloured gemstones lend themselves well to the domed style owing to their depth of colour.

Cabochon sapphires offer durability and a unique variation on the faceted gemstones seen in most jewellery. Domed Sapphires exist in many shapes and sizes. Also, they exist in a multitude of colours including blue, pink, green, yellow, orange and peach.

The following example features a circular domed shape with a flatter underside, perfect for bezel setting in a ring.

Mark attended Liverpool University and went on to pursue a career in the diamond industry. After more than a decade working in polished diamonds, Mark moved to the Isle of Wight where he launched Serendipity Diamonds. He works most days from their busy Ryde showroom, photographing jewellery and writing for the Serendipity Diamonds website.