If you’re a recurring reader of MONOCHROME, you might know that we have a soft spot for independent and bold watchmaking. We enjoy watches made by small teams, watches that break the norm and display the creativity and soul of the people behind these timepieces. So when such a new watchmaker surfaces, we jump at the chance to look at it with a fresh mind and wide-open eyes. Today, we present Vanguart Watches, a new indie watchmaker with modern designs and complex mechanisms, and its first creation, the impressive Black Hole Tourbillon watch. 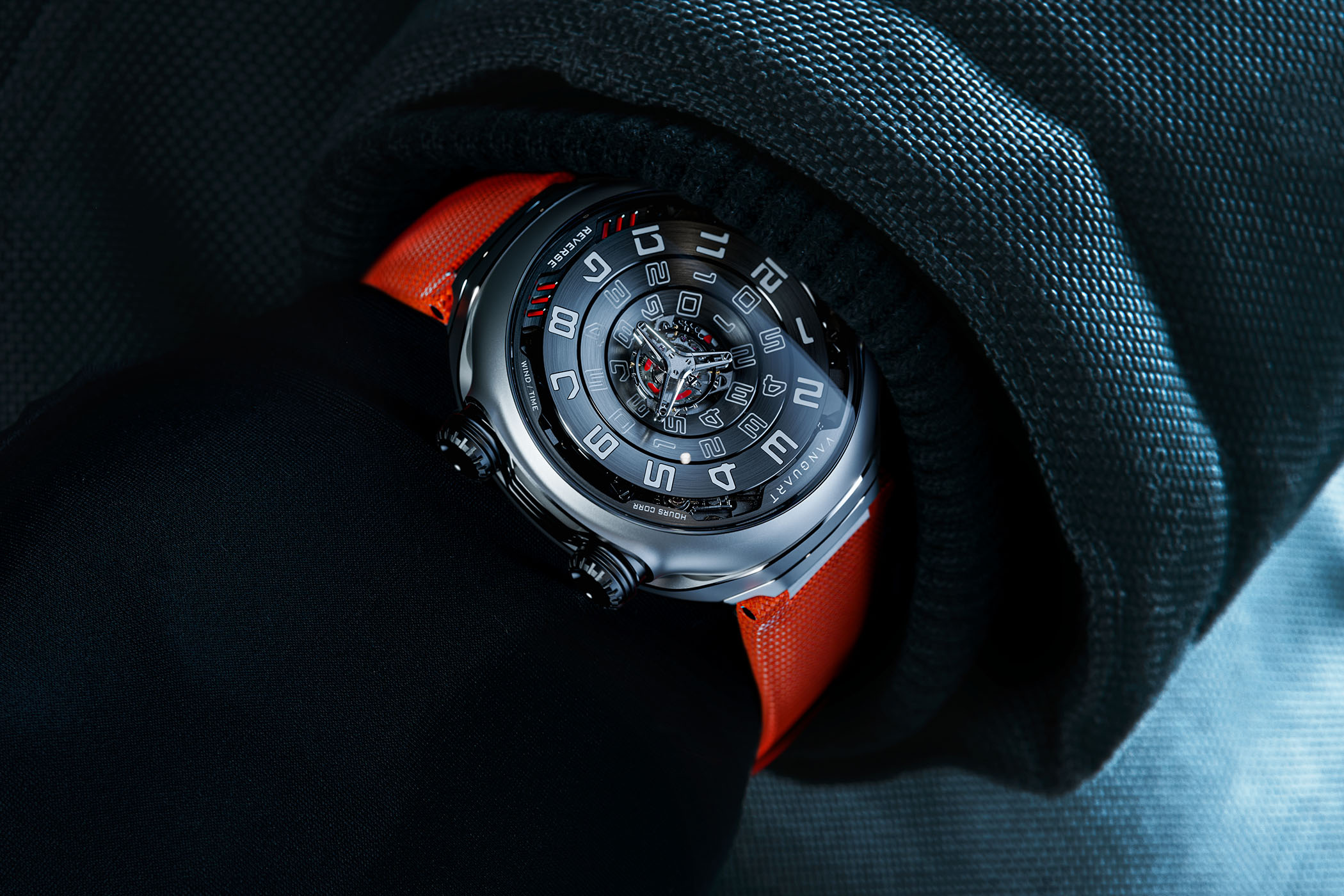 The team behind Vanguart Watches

This new brand was founded by four men: Thierry Fisher, Jeremy Frelechox, Axel Leuenberger and Mehmet Korutürk. Axel Leuenberger, the CEO with experience at APRP (Audemars Piguet Renaud Papi), is behind the conception of the watch. Thierry Fisher is the creative director. Jeremy Frelechox is the CTO and has 15 years of experience at APRP and six years at Girard-Perregaux. And finally, Mehmet Korutürk, Chairman of Vanguart, has a background in finance and was working for a private equity company that owned an F1 team.

In addition to that, Vanguart has recently announced that NBA player James Harden is a new shareholder. Along with his stake in the company, Harden, named NBA MVP, has been appointed as Creative Advisor and Vanguart brand ambassador. Harden has been named an NBA all-star nine times and is responsible for having led Team USA to gold medal status at the 2012 Olympics, as well as the 2014 FIBA World Cup.

Behind this watch is the concept of a black hole, one of the most fascinating events to occur in space. As a reminder, a black hole is a region of spacetime where gravity is so strong that nothing can escape its pull. Not even light can get out, which is why black holes are invisible. 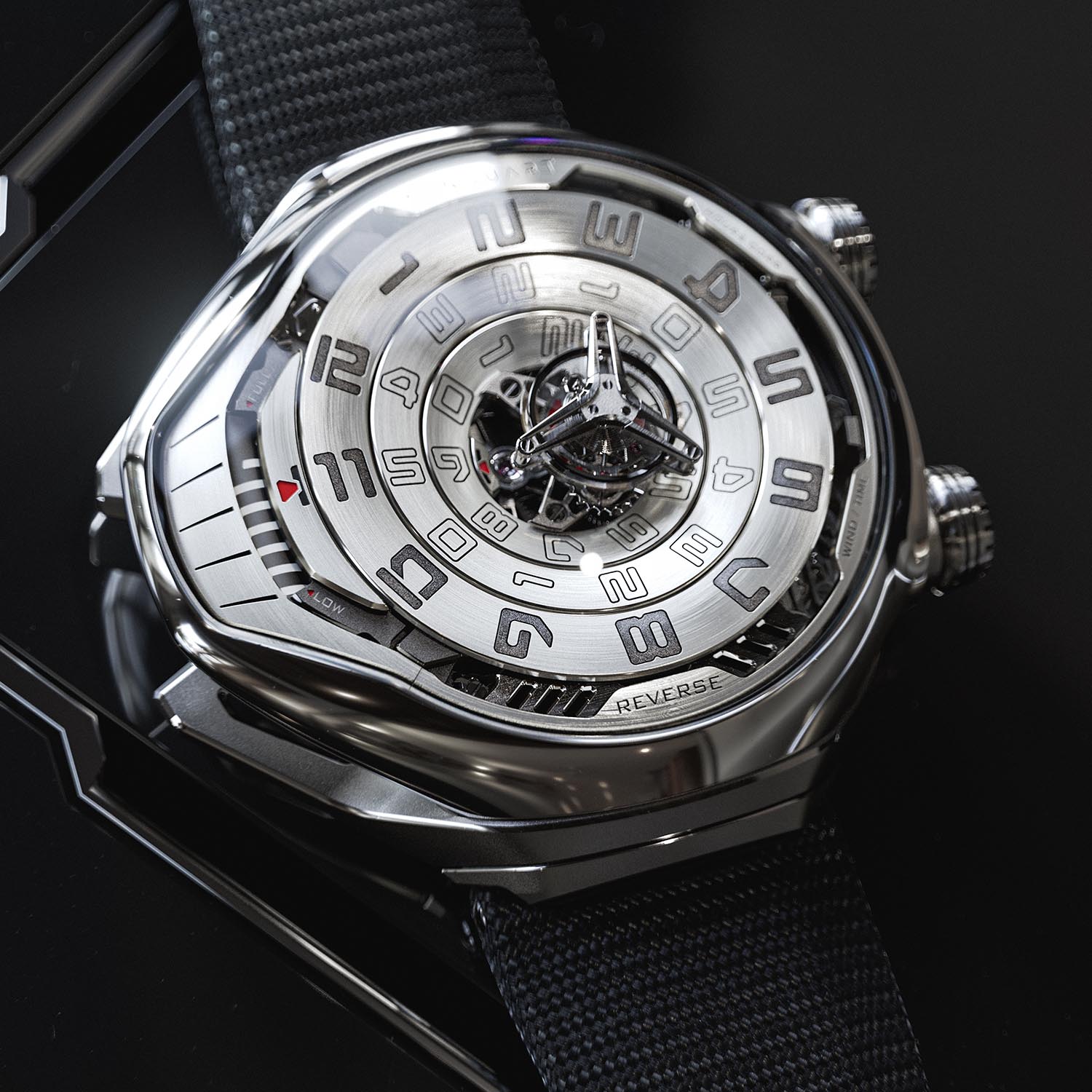 The Vanguart Black Hole Tourbillon has been designed integrally, with a movement and case that are one piece. Certainly far from being consensual or restrained, the shape of the case is novel, surprisingly smooth and aerial. The curves of the case meet those of the dial and end up falling into the hole that houses the tourbillon. Not the most discreet watch of year – but it wasn’t the intention either – the Black Hole Tourbillon is destined to make an impact. 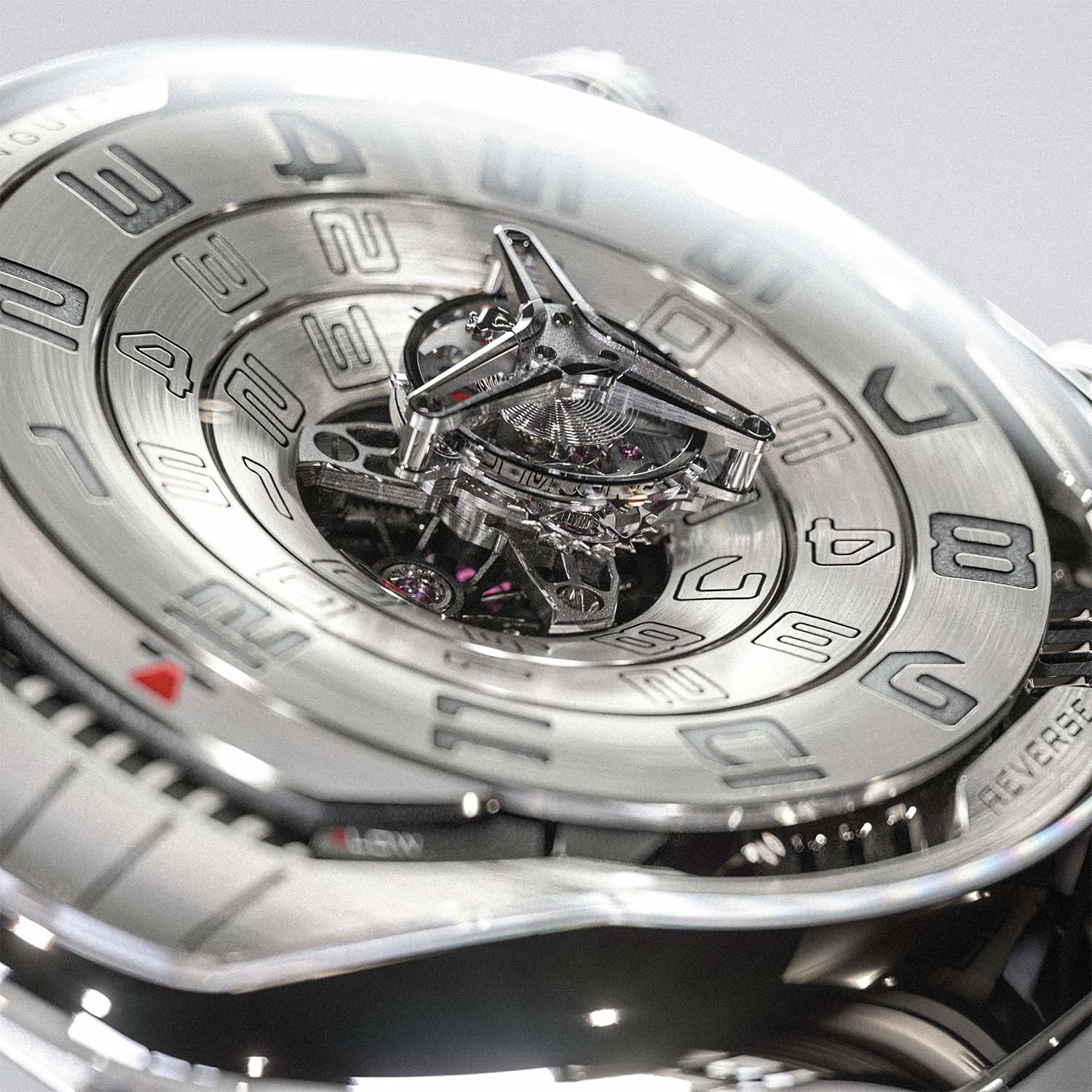 The case of Vanguart’s first watch is constructed as an exoskeleton to house the movement. Available in grade 5 titanium, 18k rose gold or 950 platinum, it has a  43mm diagonal (it’s larger from 3 to 9 o’clock but remains relatively compact from top to bottom) and is 15mm in height. Formidable dimensions, but quite classic in this category of modern independent watchmaking. The case is finished with microblasted surfaces and polished bevels to accentuate its smooth curves. The standard strap, made of rubber, is well integrated into the whole design and allows for a relatively short L2L distance. Multiple options are available for leather straps too. There is a mechanism that allows the strap to be changed at the touch of a button, concealed on the back. 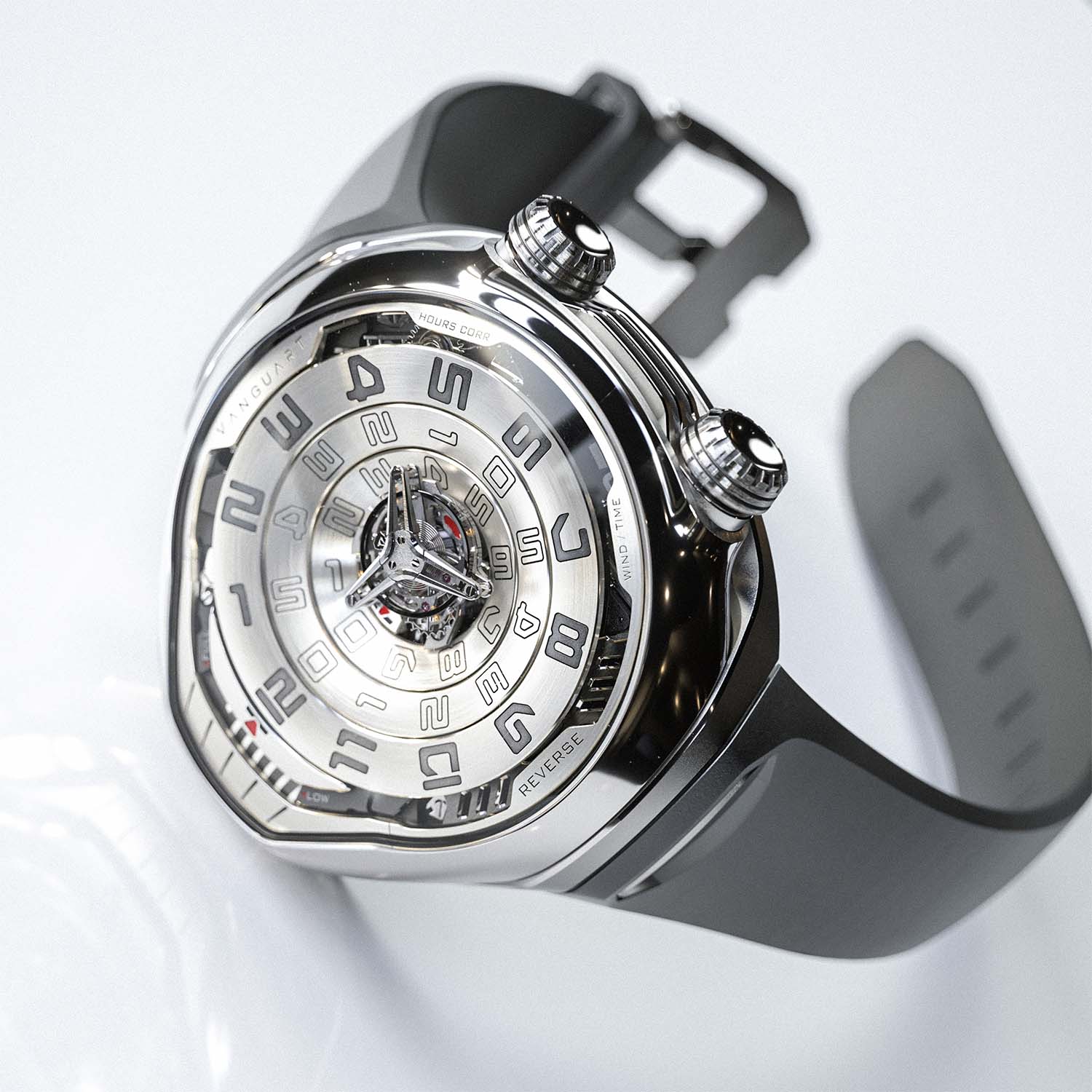 What really matters in the Vanguart Black Hole Tourbillon is the movement and its display. Centrally positioned, yet slightly offset to the right, is a one-minute, raised flying tourbillon that floats above the rest of the watch. Ironically, the anti-gravity device mimics the centre of gravity of a black hole. The cage is made of titanium, and all parts are nicely finished by hand using traditional decoration techniques. Despite comprising 88 parts, it measures 12.55mm in diameter and weighs only 0.225 grams. 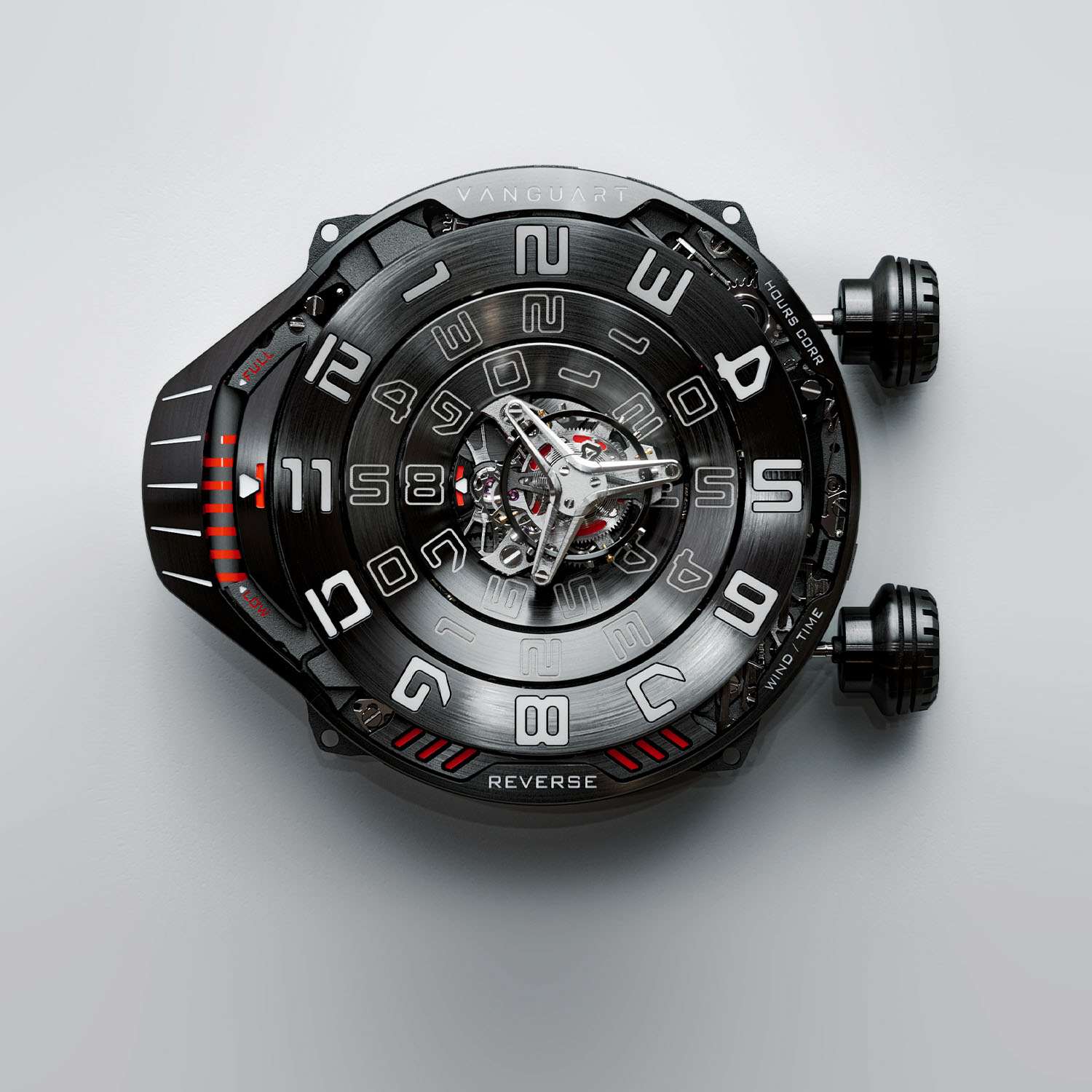 The display consists of three smooth, concave discs, which have been designed to mimic the gravitational waves and the curvature of the spacetime. From the periphery to the centre, the discs indicate the hours, the tenths of minutes and the minutes. This display, which is named automaton by the brand, relies on three rotating discs, turning either clockwise or anti-clockwise according to the indication, once again for a more playful and impactful action. The discs are semi-instantaneous, meaning that they don’t jump with force, but the motion is slightly amortized to make the jump of the discs more visible by the wearer – it takes between 200ms and 500ms for the discs to change indication. 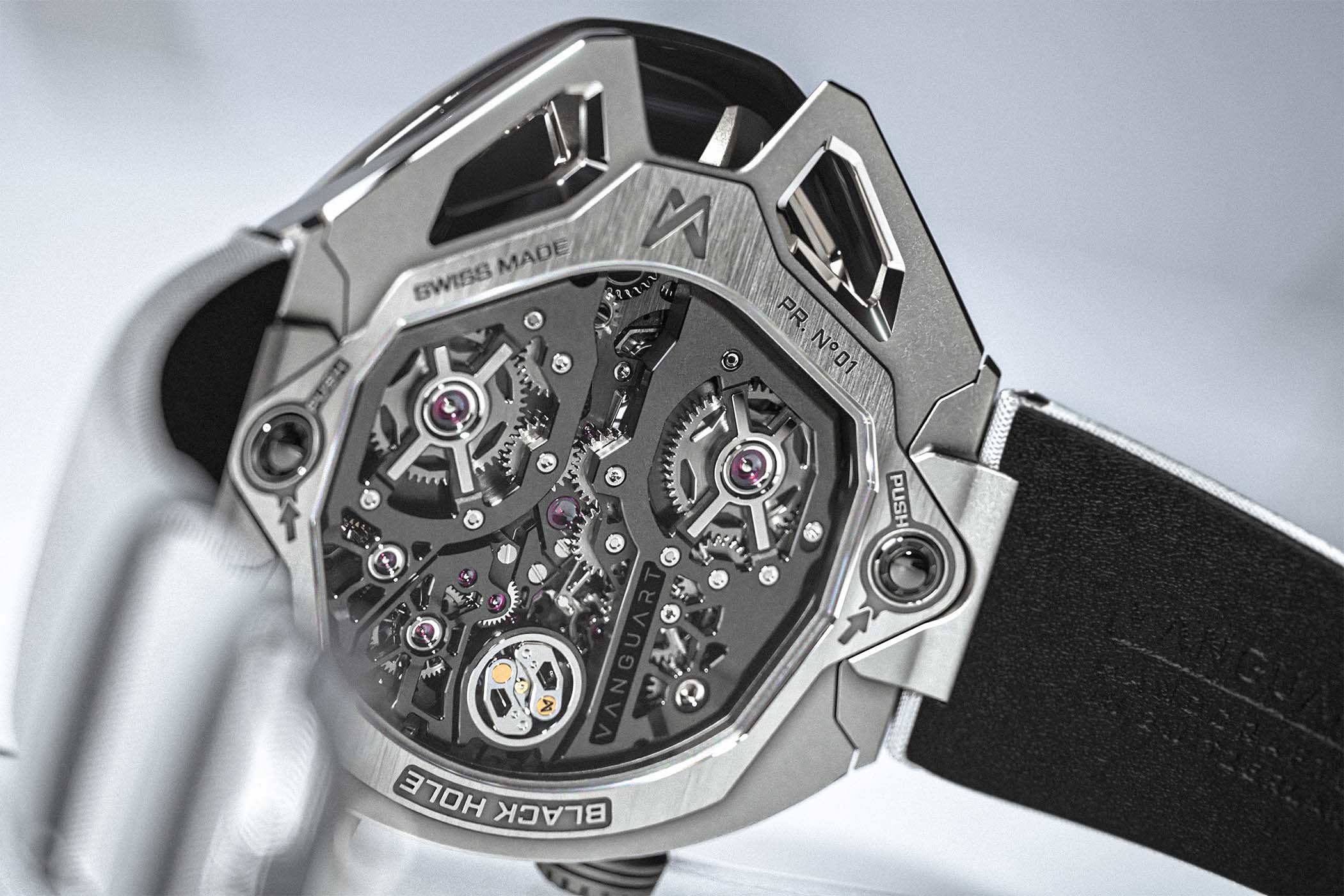 Powering this impressive and complex display is the newly developed calibre T-1701. This hand-wound engine has been conceived a bit like a grande sonnerie. It comprises two barrels and gear trains. One is used for the regulating organ; one is used to actuate the automaton display. This function could be seen as a complication au passage, and not on demand. Altogether, it comprises no fewer than 775 parts. The reverse side of the movement reveals a surprising element usually found on minute repeaters. This governor, or flying regulator, acts as a brake to control the speed at which the discs will jump – and, in fact, creates the semi-instantaneous jumps. 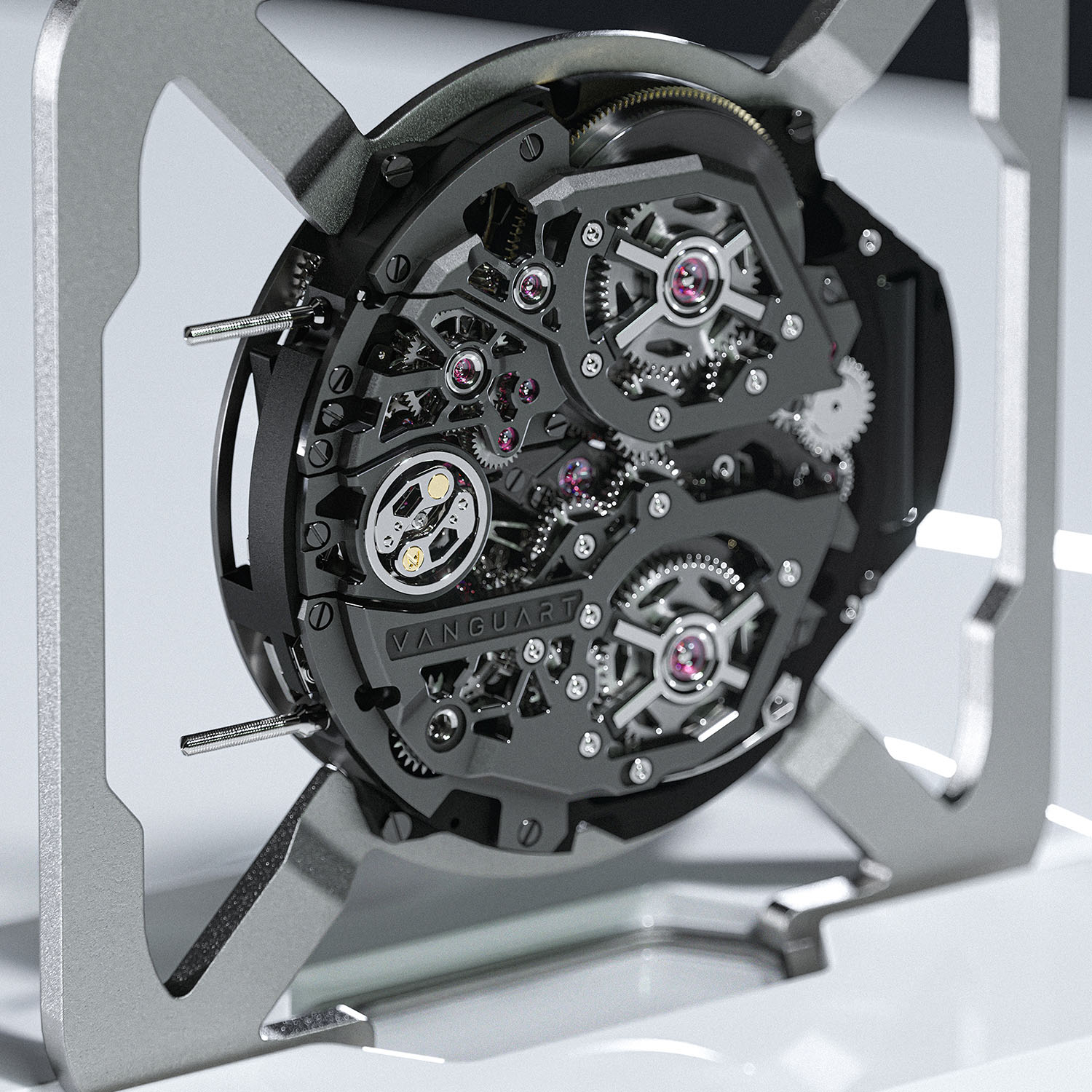 The rest of the movement is also spectacular. Despite the complex mechanisms, it stores 42 hours of power reserve. The style is highly modern, with bridges and parts that are sharply designed. Still, the decoration is traditional, with polished anglages, satin-finished parts or black-polished elements.

There’s more to the Vanguart Black Hole Tourbillon than its complications. There’s a simplification, too, according to the brand, in the name of the Joystick. As you can see, the right side of the case features two crowns. The main crown is the lower one, which serves for movement winding and time corrections. But unlike a traditional crown, it doesn’t need to be turned multiple times to change the time. Turn it 60 degrees once in either direction, and it will update the minute disc up or down. Engage it fully and leave it in position, and time will run continuously. Engage it in the other direction, and time flows back. Release it, and the display will stop. 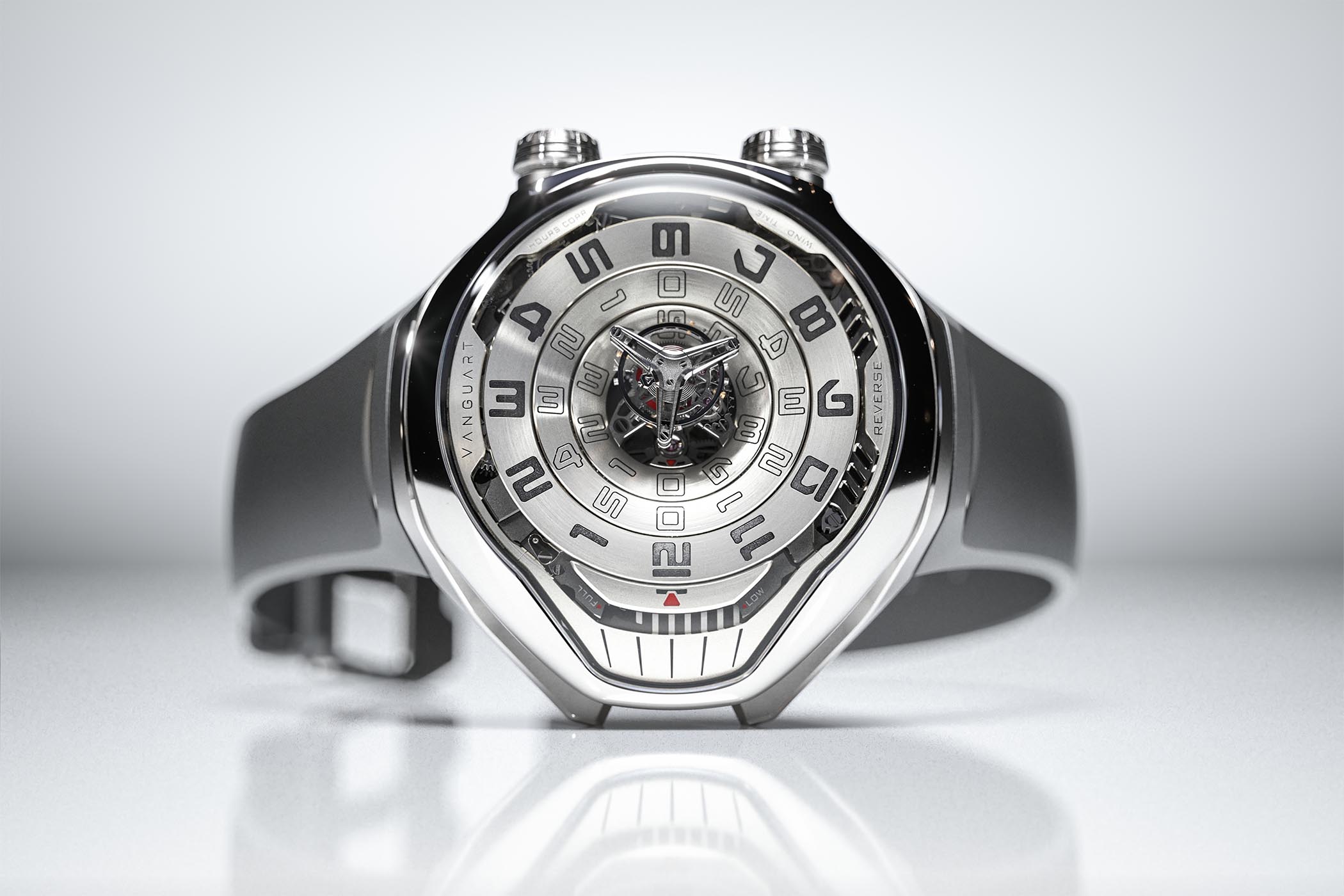 The second crown, positioned on top, is used for quick-time correction and time zone function, acting in one-hour increments on the main disc. At 9 o’clock, there is a power reserve indication. But there’s more. At 4 o’clock is a display called a “reverse scroll indicator for countdown”. So, when you adjust the time on the Vanguart Black Hole Tourbillon with the joystick, the small apertures will show red indications to let you know in which direction time flows. But also, by using the joystick, you can set the watch as a countdown timer, meaning that after pre-setting a time interval, the display will rotate in the opposite direction until reaching the zero mark. 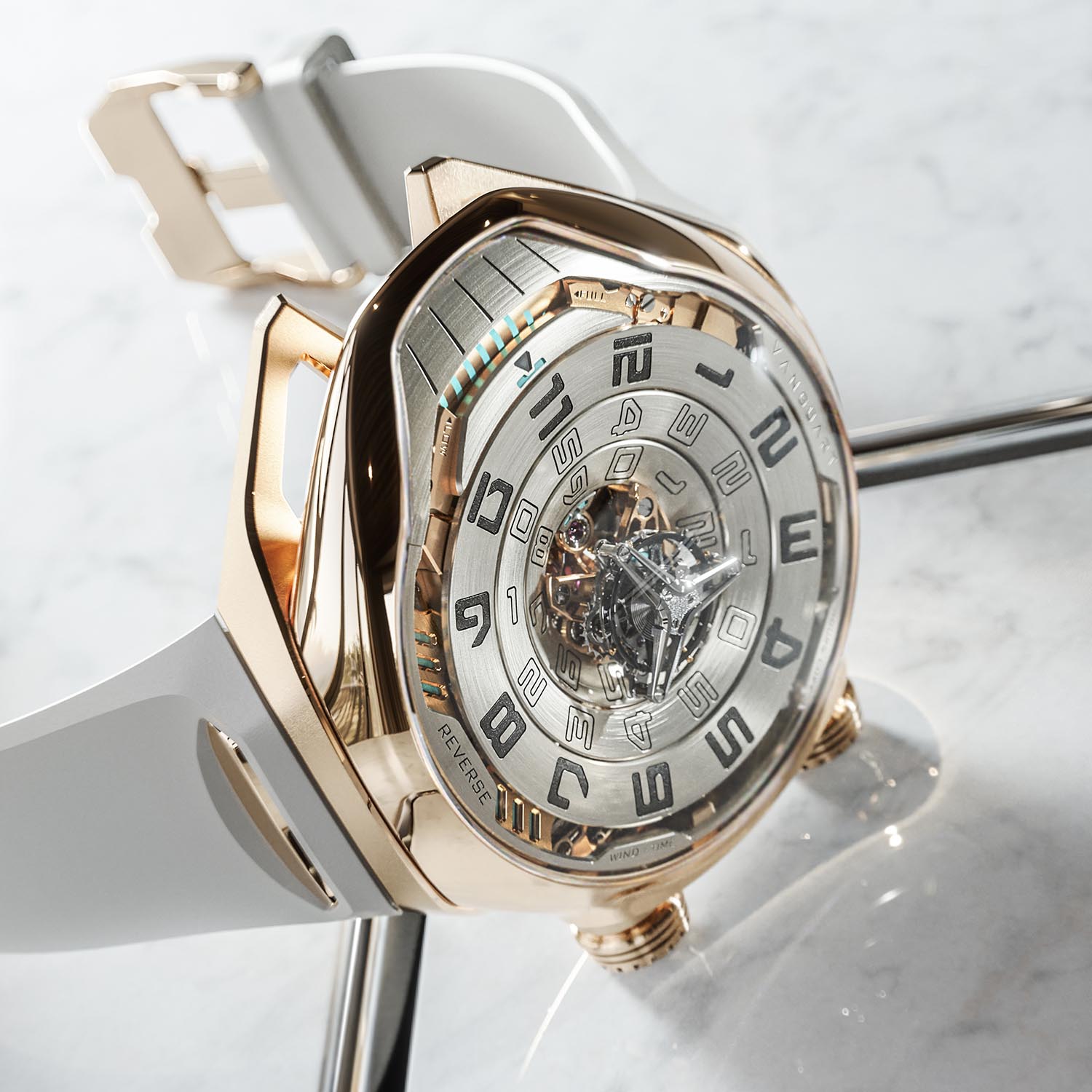 I know, there are a lot of details to absorb about the watch. In all fairness, and despite having talked to Axel Leuenberger, the man behind the concept, it remains a watch that needs to be touched and felt to be fully understood. We’ll do our best to have some hands-on time with it shortly.

The Vanguart Black Hole Tourbillon will be released in a limited edition of 8 pieces per material (titanium, rose gold or platinum) and priced at CHF 290,000 in titanium and CHF 320,000 in gold or platinum.