The History and Meaning Behind October’s Two Birthstones: Opal and Tourmaline 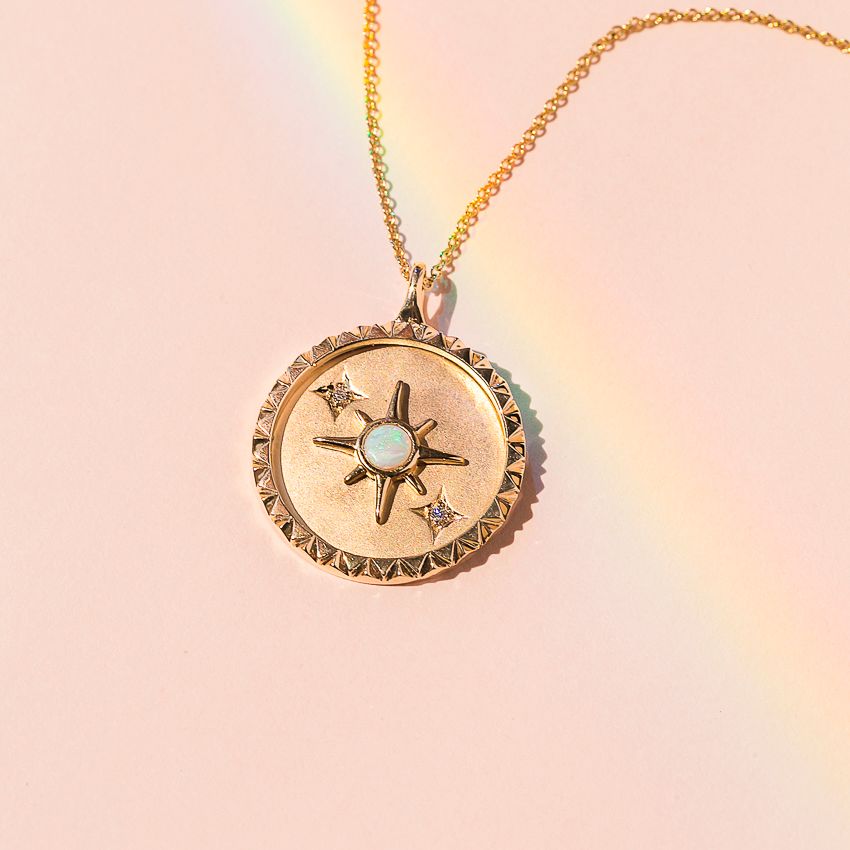 If you’re holiday or birthday shopping for someone born in October, a piece of jewelry featuring one of October’s birthstones makes for a timeless treasure!

What are the two birthstones for October?

October has two birthstones: opal and tourmaline. While both gemstones are available in a wide variety of colors, classic white opals and pink tourmalines are the two most popular choices for those born in this autumn month.

The answer is: both! Opal is the traditional birthstone for October, but modern lists include tourmaline as well. It wasn’t until 1812 that the National Association of Jewelers began including both opal and tourmaline as the two October birthstones.

What color birthstone is October?

Opals are popularly known for their milky, rainbow-colored glow and fire. While white opals are the most common and popular, opals have hues ranging across the whole color spectrum including black opals, pearlescent pinks, pale greens, and more. Opals are beloved for the dramatic “play of color” that shimmers in bursts throughout the stone. Like opal, tourmaline is also admired for its wide variety of colors. Although this beautiful gem comes in a variety of hues, pink tourmalines are the most popular option for October birthstone birthday gifts.

Like several of the world’s most popular gems, opals are believed to have originated in India. In Sanskrit, opals were called “upala,” meaning “precious stone.” When these ethereal gems were brought to the Western world, ancient Romans called them “opalus.” Bedouin tribes used to believe that opals contained lightning that fell during storms, and Ancient Greeks thought these stones gave the gifts of prophesy and health. In the past, opals were also believed to symbolize purity and hope due to their celestial coloring. Because of their unique smooth but fiery look, opals are most often polished in the cabochon style — a style where a gem is shaped and polished instead of faceted. In addition to being the birthstone for October, opals are also the traditional 14th wedding anniversary gift.

Opals range from 5 to 6.5 on the Mohs scale of hardness, meaning they are a relatively soft gem. For reference, diamonds rank 10 as the hardest mineral. Because of this, it’s important to treat opals and opal jewelry gently to avoid scratching or chipping the surface. It’s recommended that you store jewelry featuring opals by themselves away from other jewels, as diamonds, rubies, sapphires, emeralds, and other harder stones can scratch this October birthstone.

When cleaning an opal, the safest method is to gently wipe it down with lukewarm, soapy water. Other more intense cleaning methods could damage the gem. Opals have the potential to fracture due to extreme heat or sudden temperature changes, so steam or ultrasonic cleaning methods are not recommended.

The name tourmaline comes from the Sinhalese word “toramalli,” meaning “stone with mixed colors.” This is because many tourmaline gems feature multiple colors in one crystal formation, and some can also appear to be different shades when looked at from different angles. One of the most famous examples of this is the “watermelon” tourmaline that features red and green stripes. In fact, there are very few types of gems that offer such a variety of colors as tourmalines do. According to ancient Egyptian legend, the stone traveled along a rainbow collecting all of the rainbow’s colors, which is why tourmaline is found in such a multitude of hues. Some of the most popular tourmaline colors are emerald green, red rubellites, and October’s birthstone of pink tourmaline. Because of its all-encompassing color variety, it’s believed that tourmalines help inspire art and creative expression.

Also because of its range of colors, tourmalines have often been mistaken for other gemstones throughout history. Conquistadors from Spain found green tourmalines in Brazil in the 1500s and mistook the gems for emeralds. One of the “rubies” in Russia’s “Caesar’s Ruby” pendant – part of the Russian crown jewels – is actually a red rubellite tourmaline. It wasn’t until scientists recognized tourmalines as a unique mineral species in the 1800s that these and several other famous gems were recategorized as tourmaline.

Different tourmaline colors are believed to have different healing properties or powers. Pink tourmaline is associated with gentleness, compassion, joy, and love. In addition to being one of October’s birthstones, tourmaline is also the 8th anniversary gift.

Because it is rated 7 to 7.5 on the Mohs scale of hardness, the tourmaline birthstone is considered generally suitable for everyday wear. You can clean this October birthstone with warm soapy water and a soft brush. A baby toothbrush is a great at-home cleaning tool for tourmalines and many other gemstones! Tourmalines are durable enough to withstand light and most chemicals, but too much heat can damage these colorful stones. Because of this, ultrasonic or steam cleaners are not recommended for tourmalines. 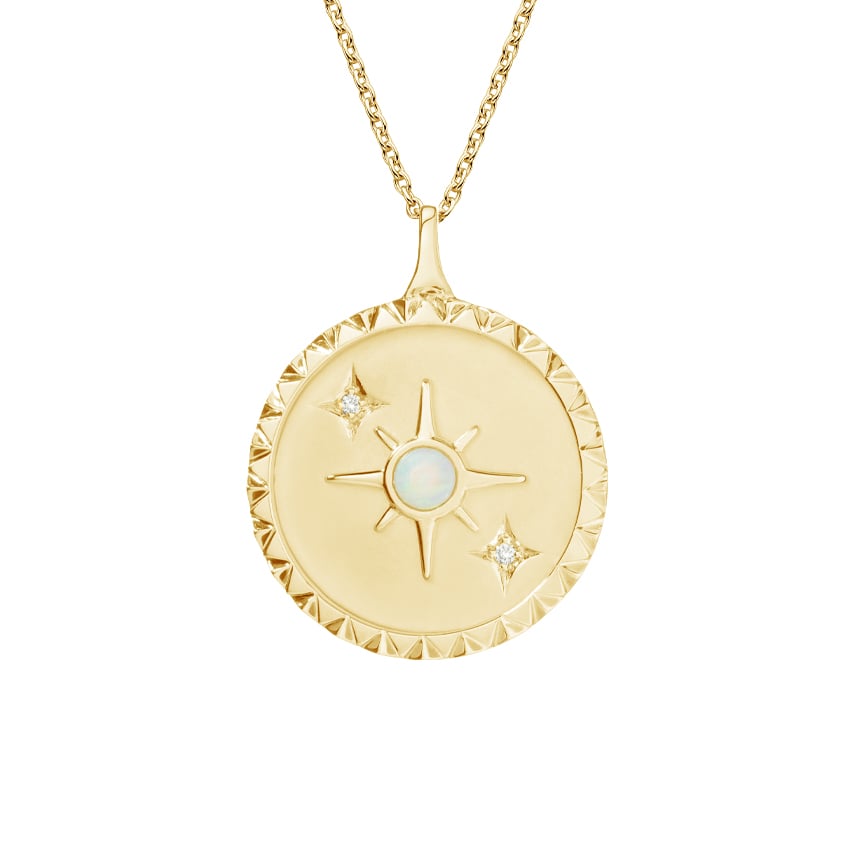 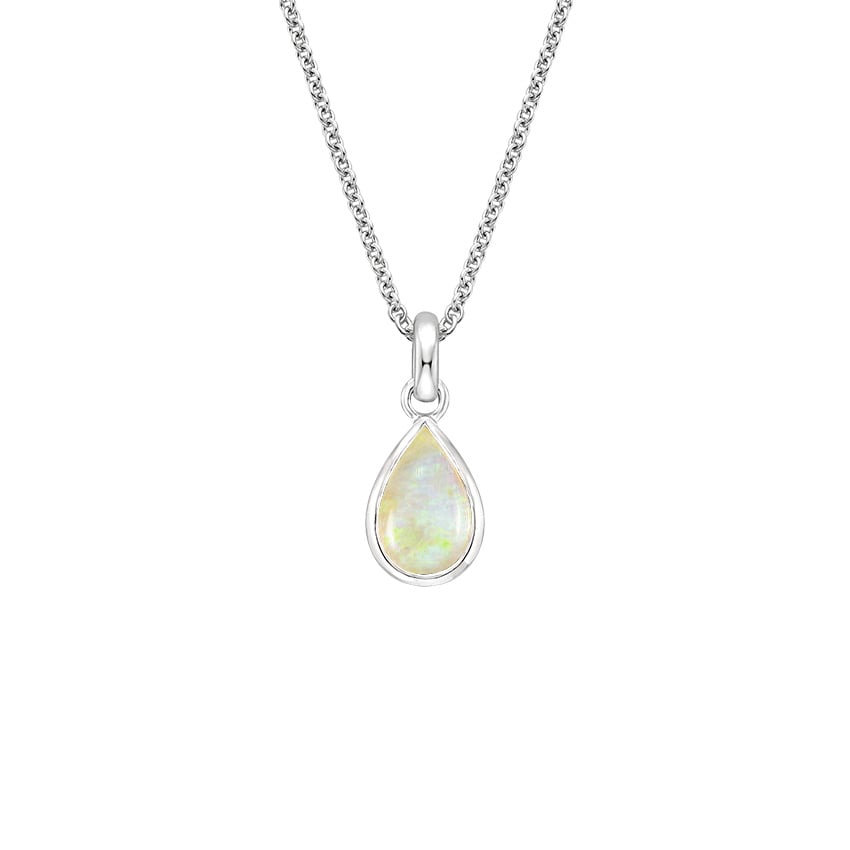 An opal cabochon rests within a bezel setting with an open back to allow maximum light to reach the gem. This reversible pendant can be worn on either side making it the perfect option for everyday wear. The length of the necklace can be adjusted to either 16″ or 18″ to suit individual preference. 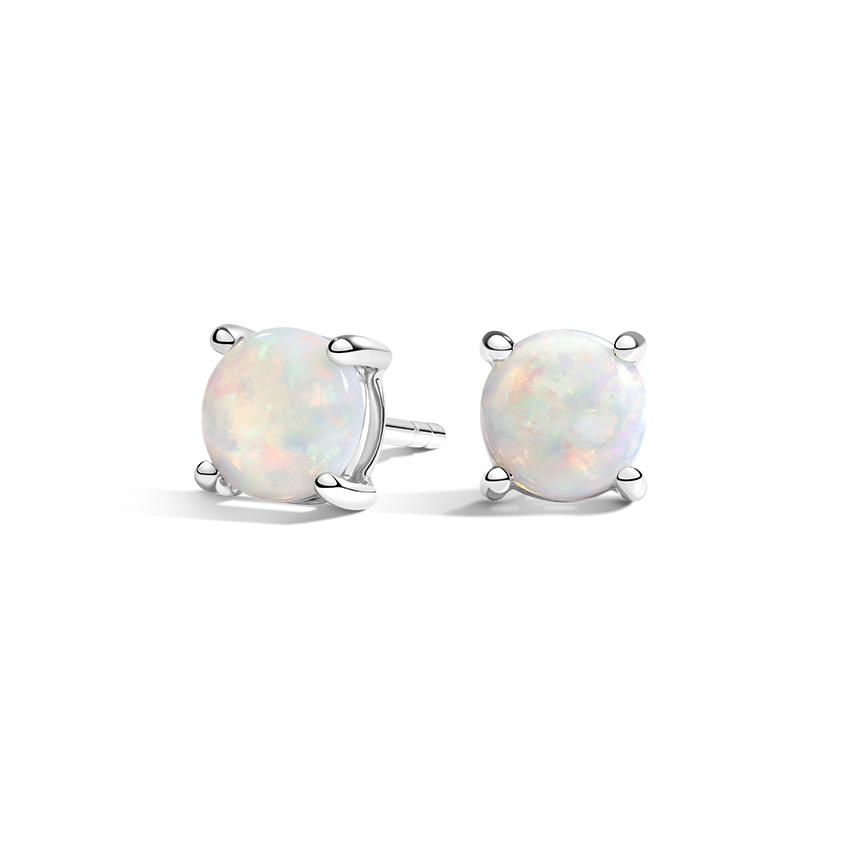 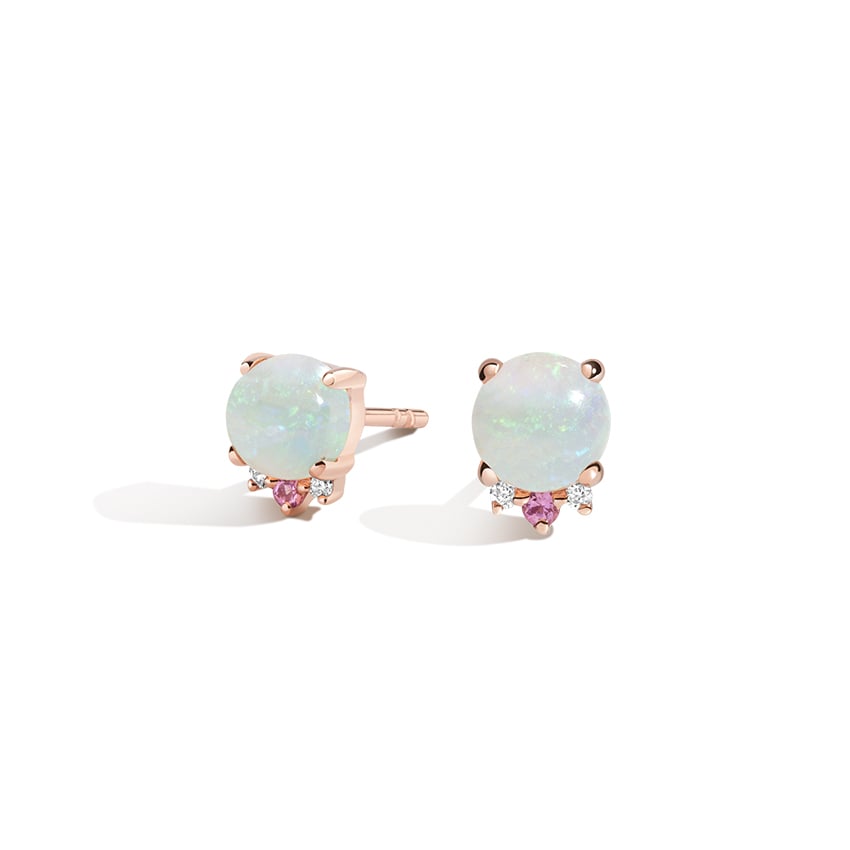 These contemporary earrings feature both of October’s birthstones with a glistening opal center stone framed by breathtaking pink tourmaline and twinkling diamonds. 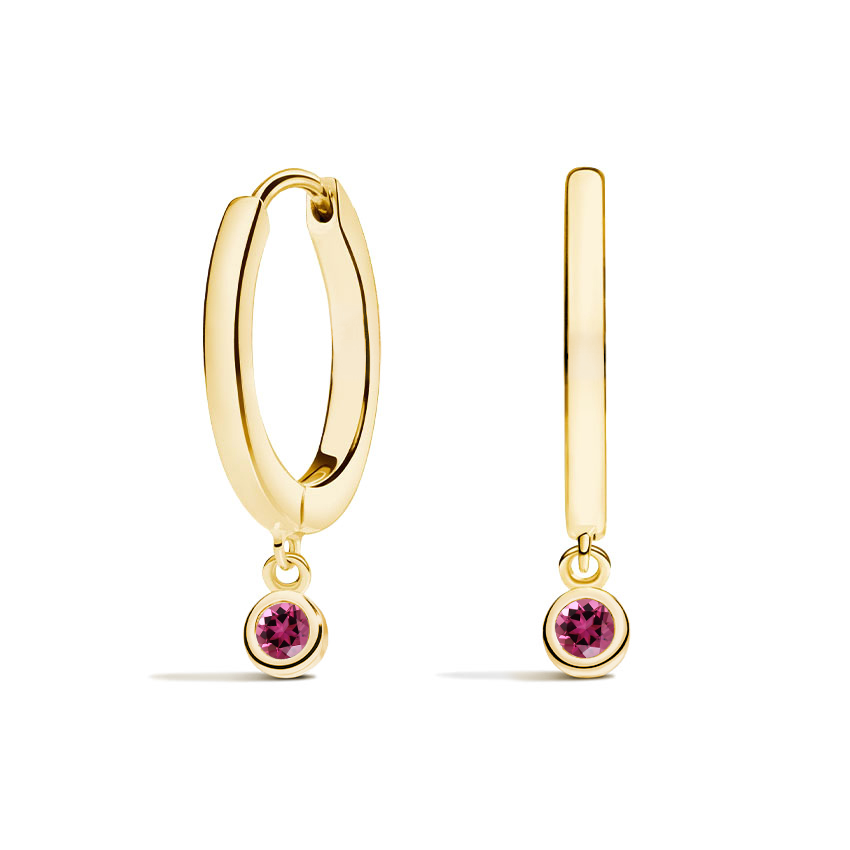 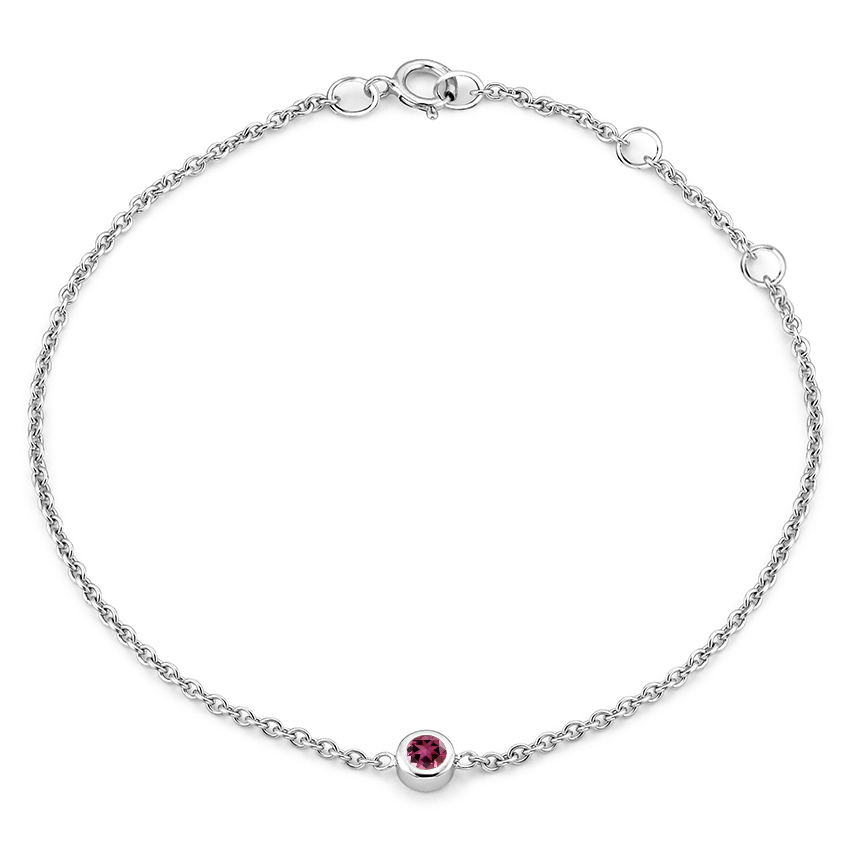 Both elegant and timeless, this bracelet features a charming bezel-set pink tourmaline on a delicate cable chain. 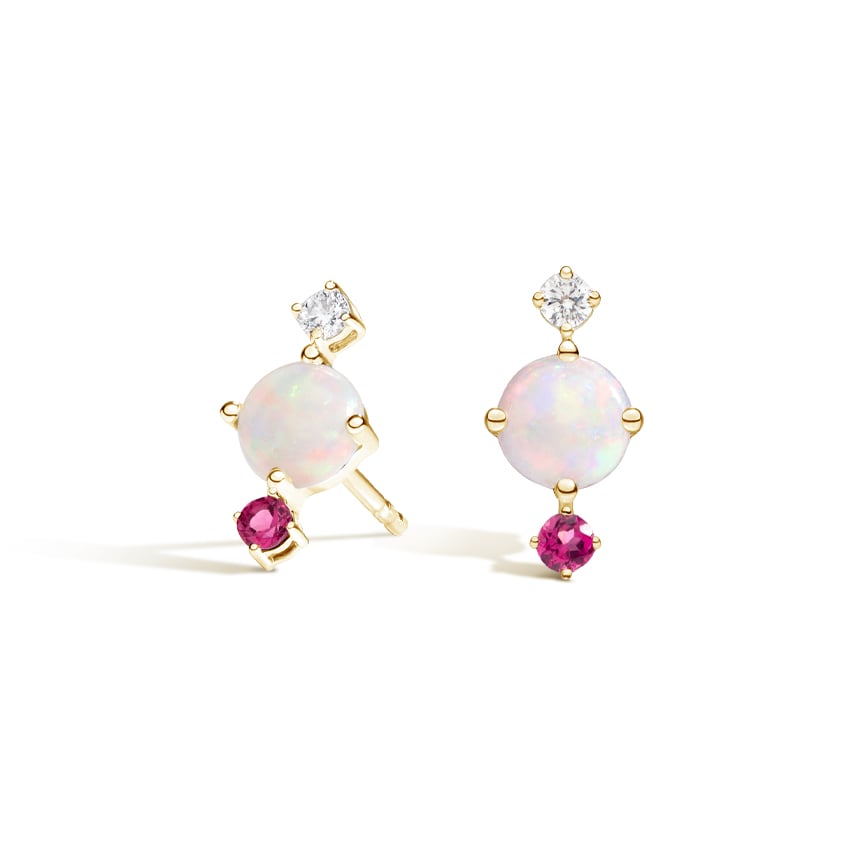 Unique and as cute as can be, these whimsical earrings feature a glistening opal center stone with diamond and pink tourmaline accents.

Do you have an October birthday? Which of October’s dazzling birthstones do you prefer? Let us know in the comments below or on our Facebook, Twitter, or Instagram!


The History and Meaning Behind October’s Two Birthstones: Opal and Tourmaline originally appeared via www.brilliantearth.com