When it comes to high-end complications, the Grande Sonnerie is king, and his successor is the princely Minute Repeater. When it comes to ingenious interpretations of these complications, François-Paul Journe is the man of the hour. Six years in the making and protected by ten patents, F.P. Journe’s 2005 chiming masterpiece, the Sonnerie Souveraine, doubled the complication factor by combining a Grande and Petite Sonnerie. Three years later, in 2008, F.P. Journe came out with his Répétition Souverain, the world’s thinnest minute repeater watch at that time. Given its complexity and limited production, this rara avis is rarely spotted in the wild. Luckily, we were able to handle and photograph a Répétition Souveraine for this review. 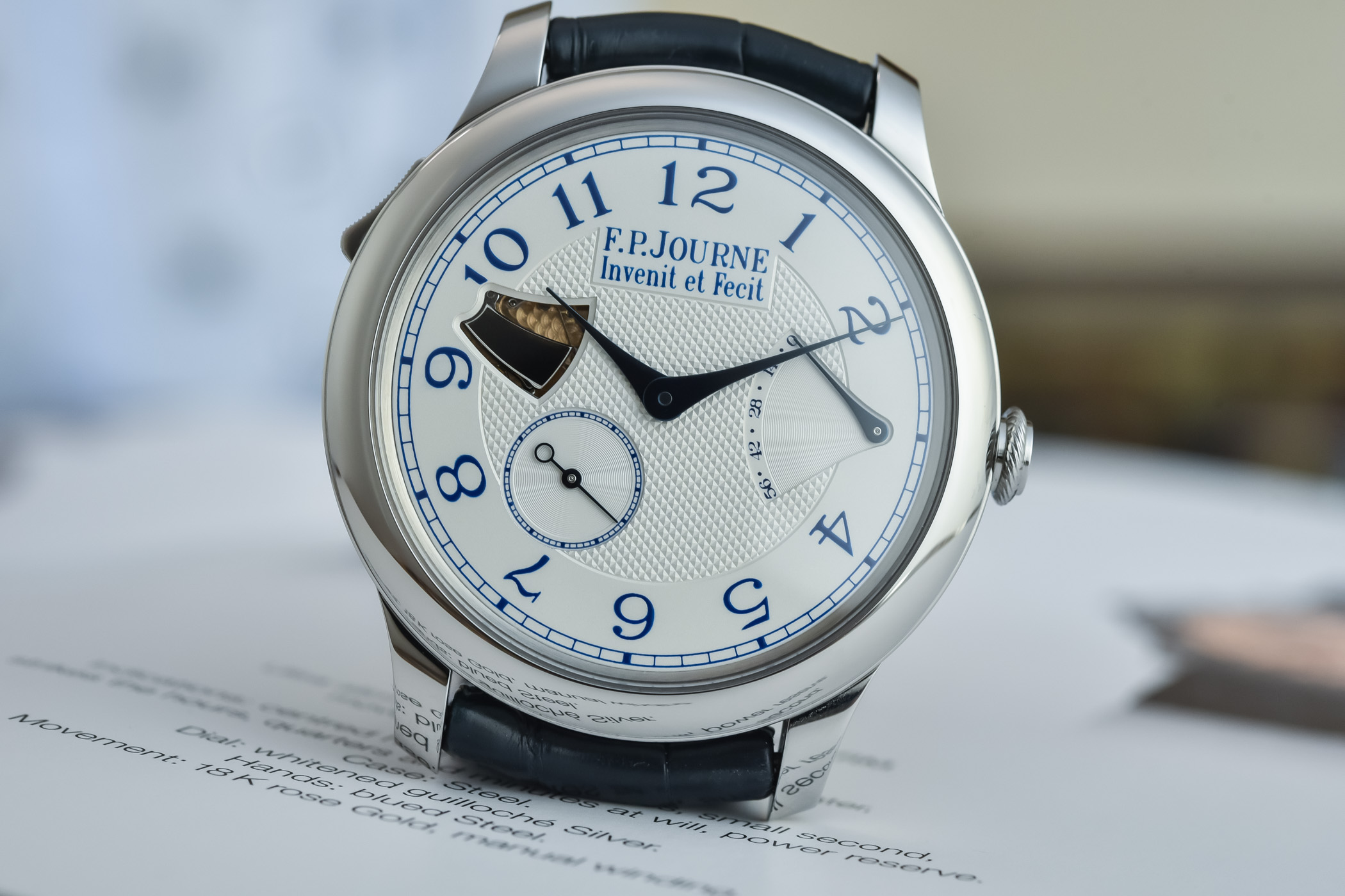 Before the advent of artificial light, most people relied on church bells or striking clocks to tell the time in the dark. According to historical records, the first clock to strike the quarter-hour on demand appeared in England, circa 1675. The more sophisticated minute repeater was produced around 1710 in Friedberg, Germany. By activating a pusher or a slider on the case of a portable minute repeater clock, privileged folk could hear the time as the hammers struck gongs to sound the hours, quarters and minutes. Within the universe of chiming watches, there are different categories. A quarter repeater, for example, strikes the hours on one tone and the quarter-hours on another. A 5-minute repeater strikes the hours and then the number of 5-minute elapsed intervals. A minute repeater, as its name indicates, strikes the hours on a low tone, the quarters with a sequence of two tones (high and low) and the minutes with a second high tone. 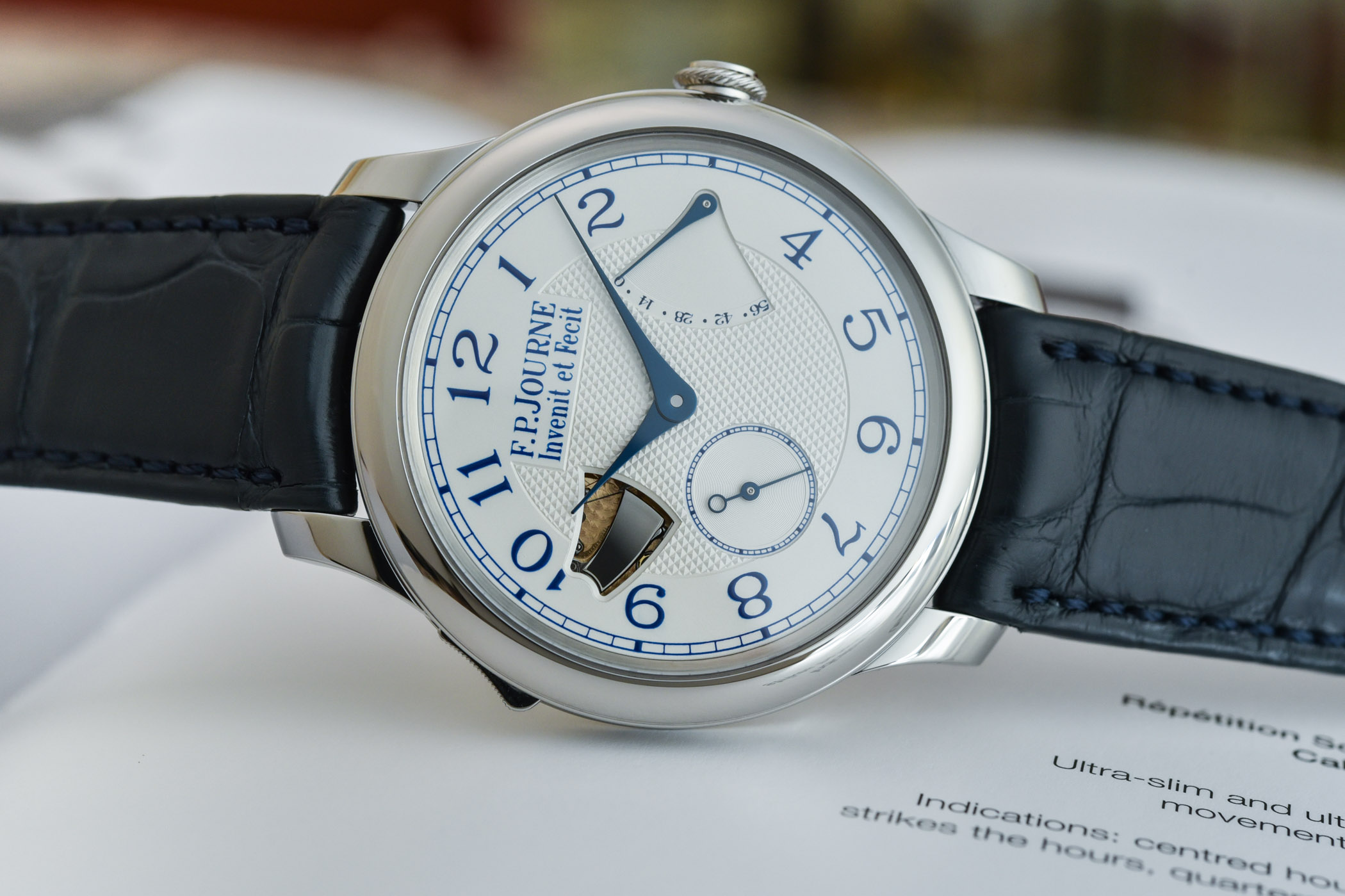 Unlike some of the more fussy baroque representatives of chiming watches, F.P. Journe’s distinct yet understated design has resulted in a minute repeater that can be worn – even daily! The simple, unpretentious design of the Répétition Souveraine might even be confused with the time-only Chronomètre Souverain model were it not for the small aperture on the dial between 9 and 10 o’clock and the slider on the caseband. In fact, comparing the two watches reveals the impressive technical wizardry deployed by F.P. Journe to miniaturise and slim down the complex minute repeater mechanism. Compared to the time-only Chronomètre Souverain or Chronomètre Bleu, the case of the minute repeater, which has a height of 8.80mm, is just 0.20mm thicker. And with almost double the parts, the movement of the repeater (4.50mm) is only 0.50mm thicker than the simpler time-only model. 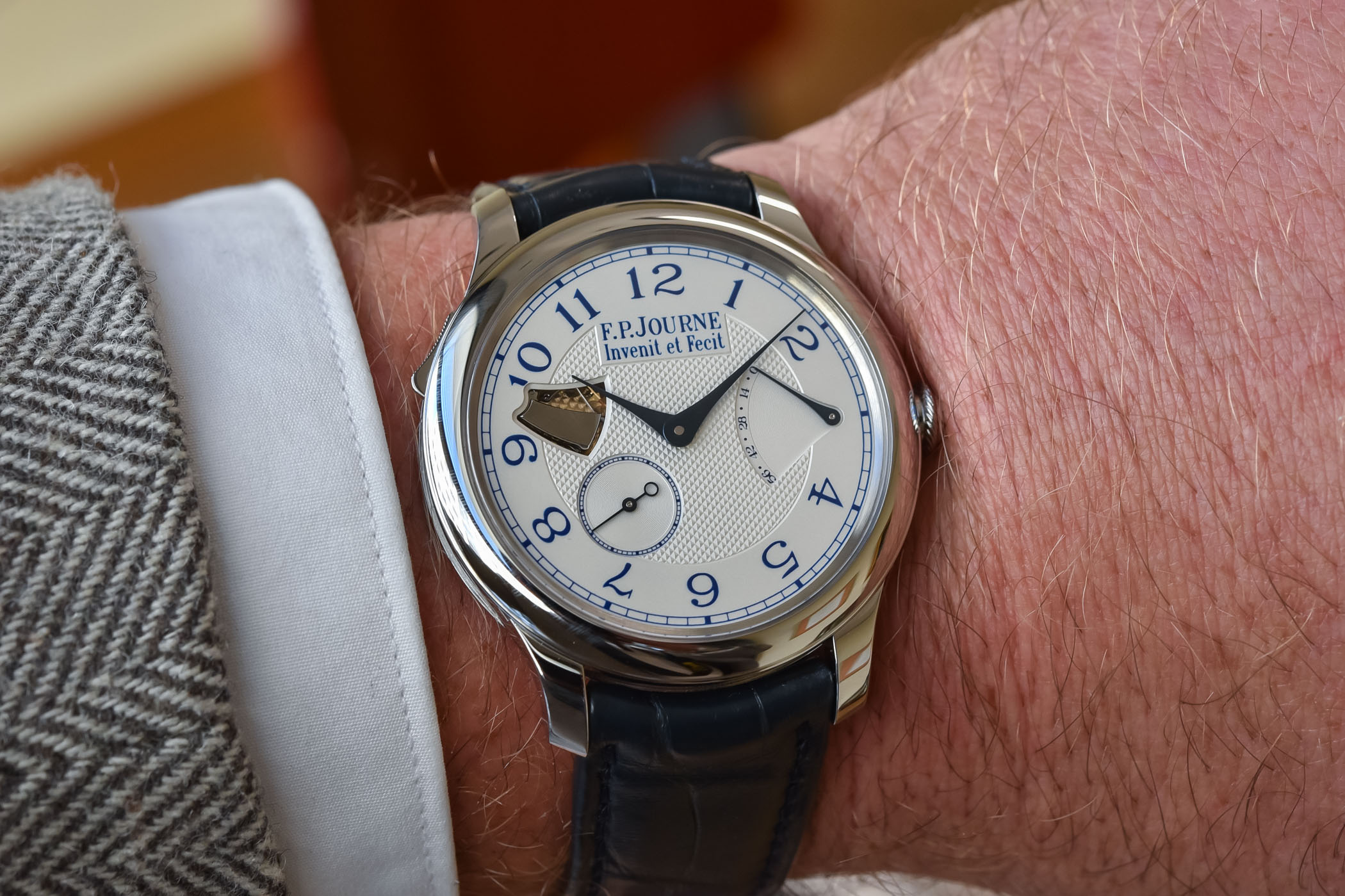 When it was launched in 2008, the Répétition Souveraine was the slimmest minute repeater in the world until it was trumped by Vacheron Constantin’s Patrimony Minute Repeater Ultra-Thin with its case height of 8.10mm in 2013, and then in 2016 by Bvlgari’s Octo Finissimo Minute Repeater with its 6.85mm case height. 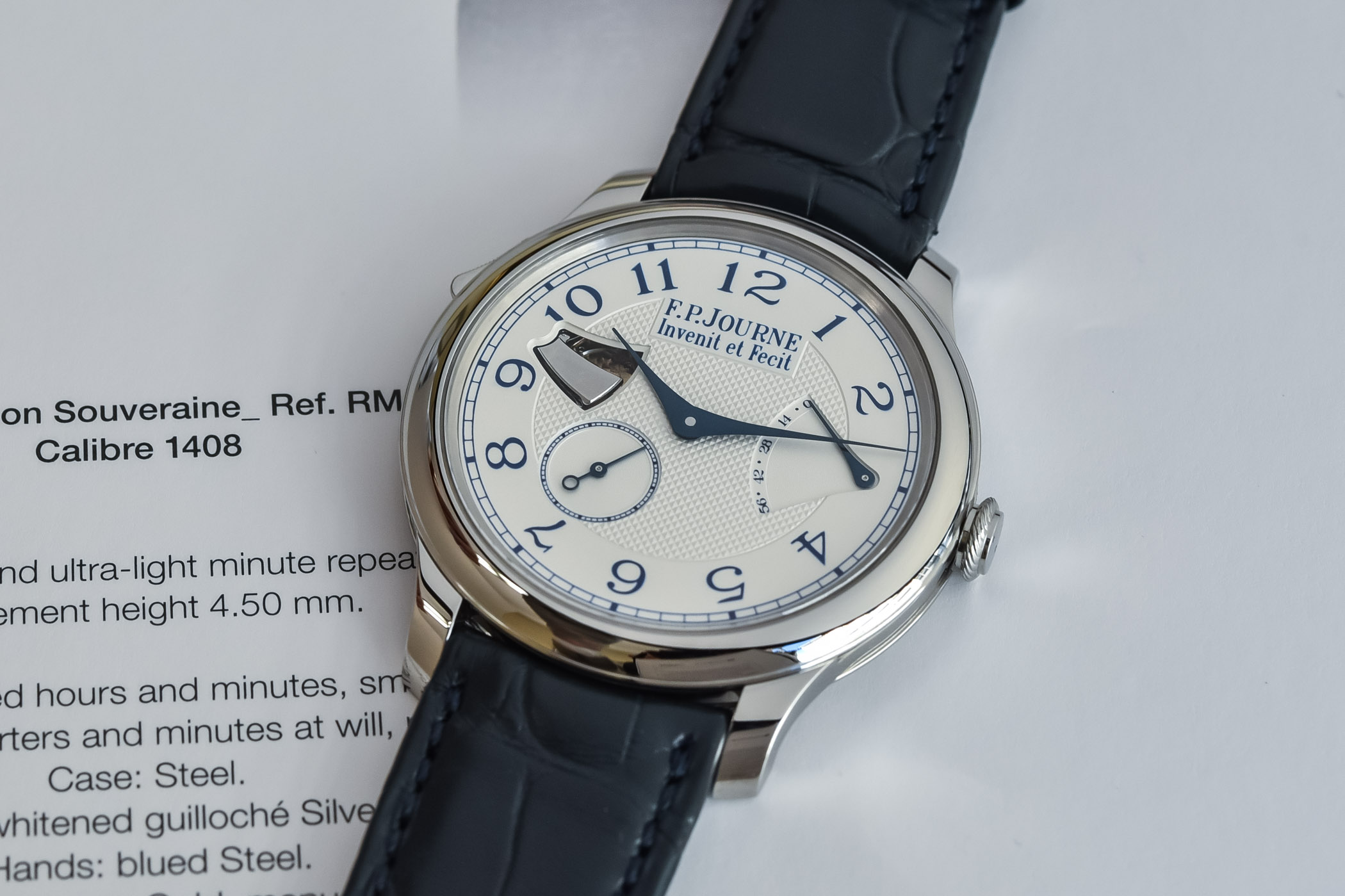 Very much in keeping with François-Paul Journe’s signature style and similar in layout to the simpler Chronomètre Souverain model, the whitened silver dial features a central Clous de Paris guilloché pattern, an elegant fan-shaped power reserve indicator at 3 o’clock and a small seconds counter between 7 and 8 o’clock. The power reserve and small seconds display a moiré finishing contrasting with the satin-finished chapter ring. The F.P. Journe Invenit et Fecit inscription just below noon intersects the guilloché area. Another quirky yet highly distinctive trait of F.P. Journe’s watches is the upside-down numerals from 3 to 9 and the unusual flat blued-steel hands that taper from a round base to needle-thin points. The Arabic numerals, minutes track, hands and inscriptions on the dial are all blue. 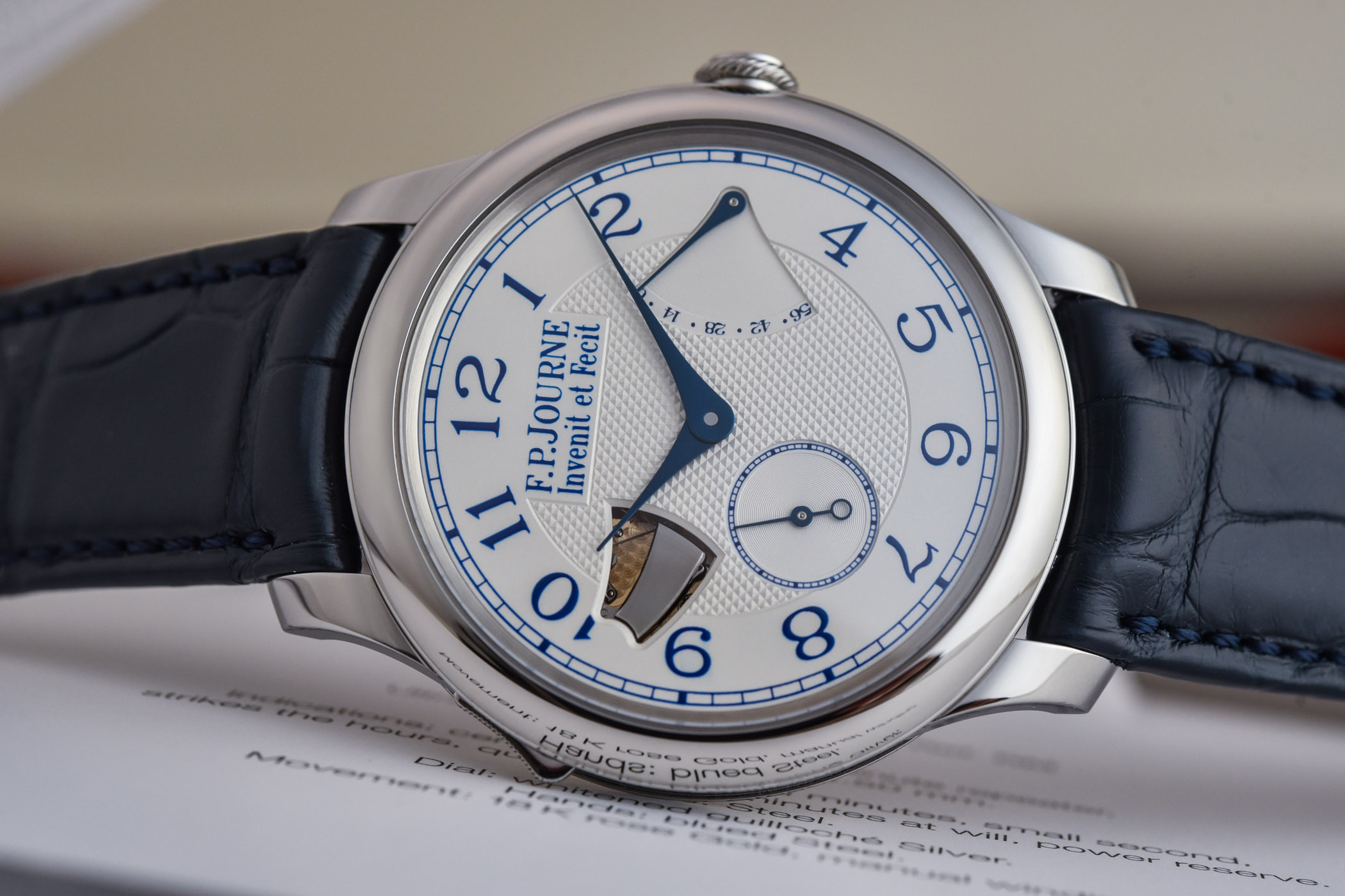 F.P. Journe’s inventiveness is prodigious, and his solutions to create a minute repeater mechanism that produces a strong crystal clear tone in an impossibly slim 18k gold movement of just 4.50mm is proof positive of his genius. 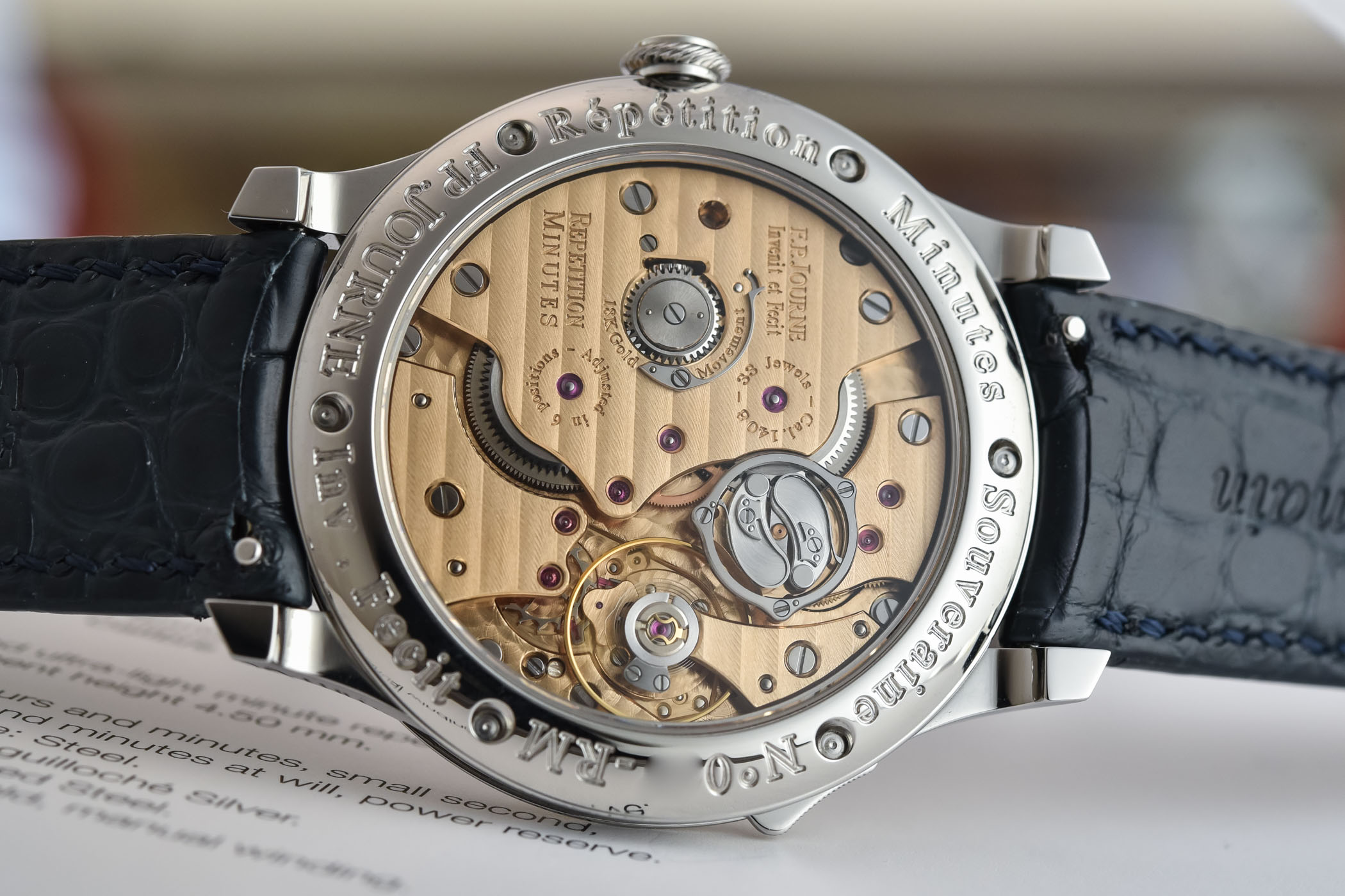 In a departure from Journe’s predilection for precious metal cases, the case of the Répétition Souveraine is made of stainless steel because the lower density and “the crystalline structure of steel” ensure the “best possible striking tone”. Another surprise for anybody lucky enough to get his or her hands on this watch is its lightness. According to the technical specifications, the watch with the strap included weighs just 69.6 grams. The raised, fluted area of the crown makes it easier to wind (38 turns) and extract to adjust the time in position 2. The asymmetrical aperture on the dial between 9 and 10 o’clock reveals the hammers of the chiming mechanism that are activated by the slider on the left side of the case. The action of moving the slider loads a small spring to activate the minute repeater. 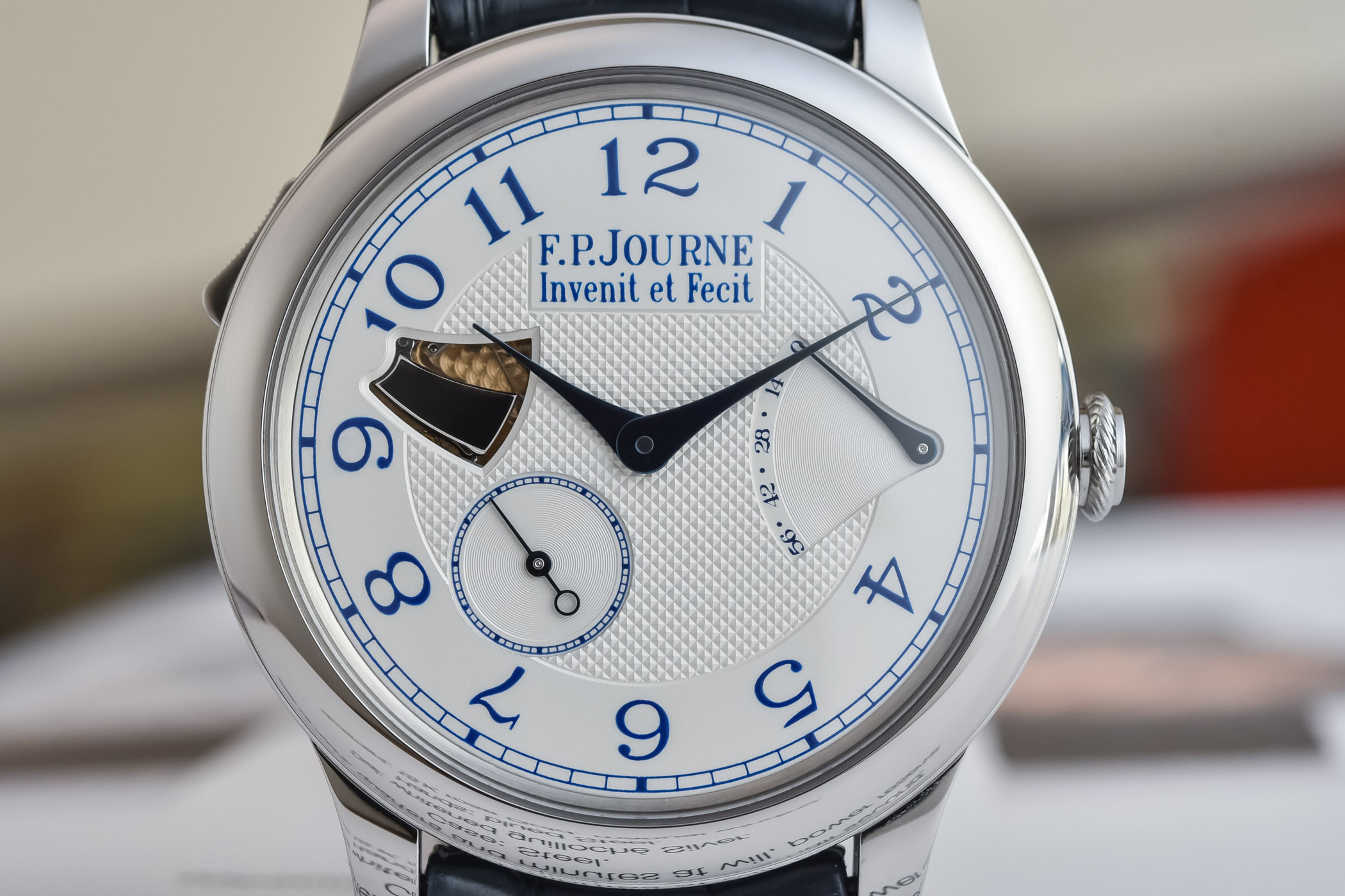 The sound emanating from the case is louder and clearer thanks to the incorporation of a patented flat gong mounted under the dial instead of around the movement, allowing more space for the movement. Journe first used the flat gong on his Sonnerie Souveraine. Because the gongs and the hammers are flat, they can be mounted on the mainplate and produce a louder chime than other repeaters. If you look at the photograph of the openworked model, you can see the flat hammers at 10 o’clock and the flat gongs running between 5 and 9 o’clock on top of the mainplate.

The second patented innovation is Journe’s system of striking racks and strike selection mechanism that take up much less space than conventional strike mechanisms. An inertia regulator (governor) controls the speed of the chimes and eliminates the background noise associated with traditional air regulators. 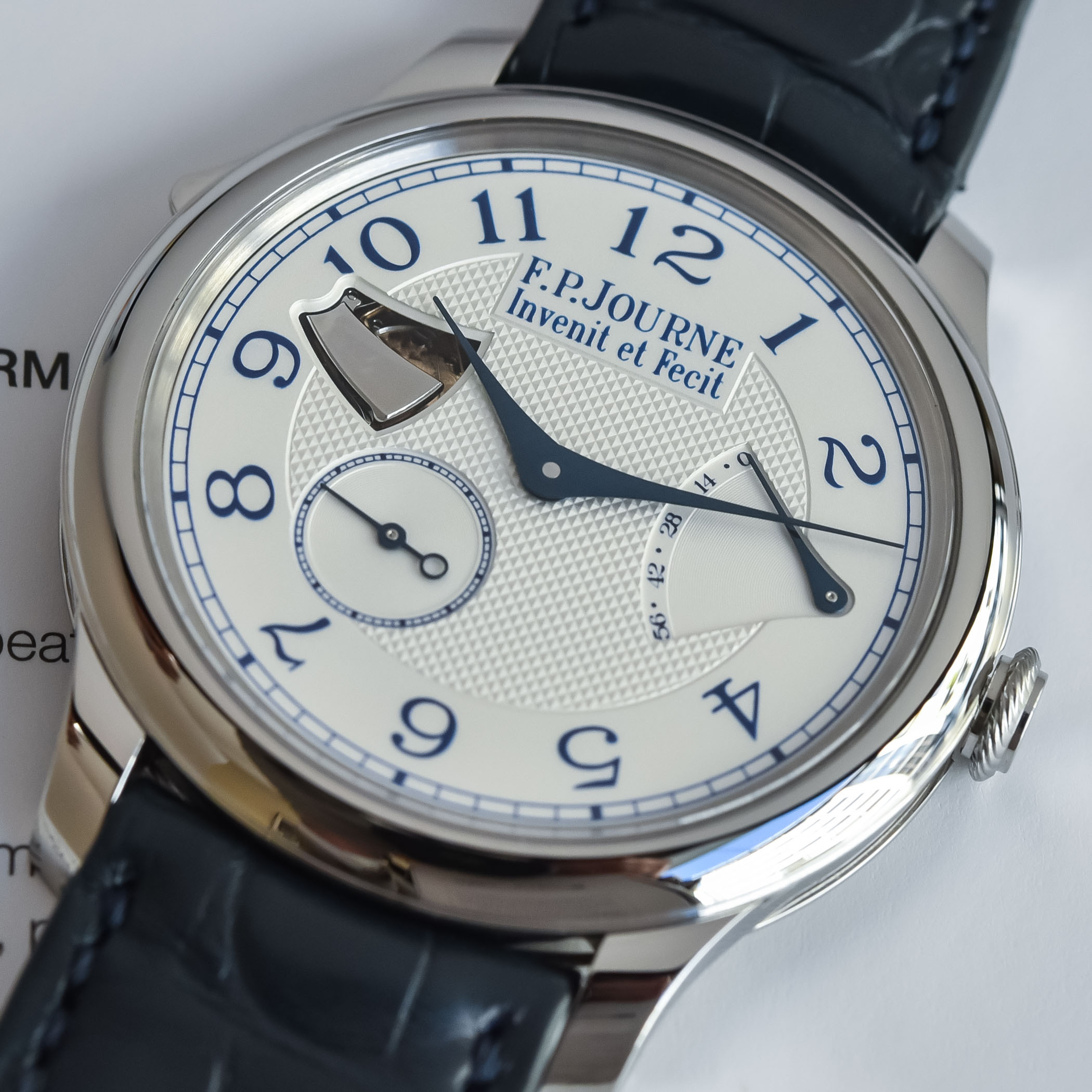 While the dial could be described as restrained and discreet, the caseback offers a view of the spectacular manual-winding movement with base plates and bridges in 18k rose gold. Lavishly decorated with straight waves on the bridges and circular graining on the base plate, the gold elements secure the mechanical parts. To the left of the balance wheel is the repeater governor/inertia regulator set inside a steel frame with three screws to regulate the speed of the chimes. Two mainspring barrels in parallel deliver a (steady) power supply of 56 hours, and the free-sprung balance beating at 21,600vph, with variable inertia adjustment on four weights, is adjusted in six positions. 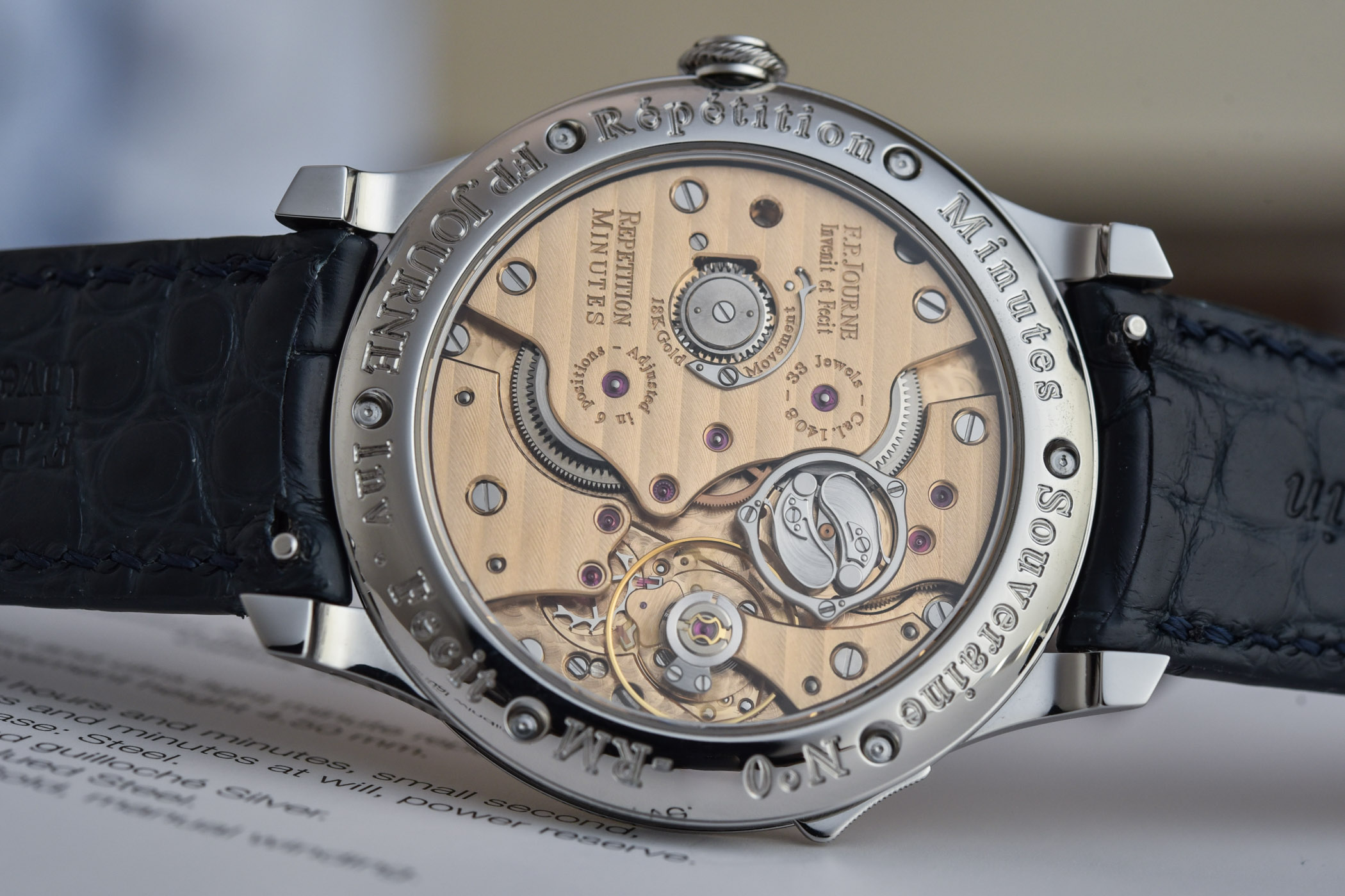 The Répétition Souveraine is a glowing testament to F.P. Journe’s inventiveness interpreted in his signature style. The result is a discreet, slim, light, unpretentious-looking watch extending its lucky owner an open invitation to be worn and enjoyed daily. Although the model we had for our photoshoot comes on a blue alligator leather strap, it is also available on a beautiful stainless steel 5-link bracelet.

The F.P. Journe Répétition Souveraine is still part of the permanent collection of the brand, but I cannot guarantee that it will be easy to find. The retail price is CHF 204,100.