Like it or not (and it’s totally understandable not to embrace the concept) but there’s something oddly attractive for some with the concept of character’s watches. Gerald Genta and his Mickey Mouse watches with retrograde and jumping displays is certainly no stranger to this fame, as we’ve seen recently. And there’s another brand that, already for some years, has an entire collection built around such a display too… Making the cool Reservoir concept a character’s watch feels rather natural indeed. And on the occasion of the 75th anniversary of the appearance of the characters Blake and Mortimer, the brand is about to celebrate the two heroes. By Jove!!!

The first time these two emblematic characters made their first appearance was on September 26, 1946, in the first issue of the weekly Tintin. And the duo will become cult, with nearly 15 million copies sold over the years. The series chronicles the adventures of Captain Francis Blake, a former Royal Air Force pilot who became director of the MI5, the British counterintelligence service, and his friend Professor Philip Mortimer, a specialist in nuclear physics and one of the UK’s most eminent scientists. The two heroes often find themselves confronted with their nemesis, Colonel Olrik, a world-class criminal who considers only his personal interests.

“Blake and Mortimer are old-fashioned heroes: they throw themselves headlong into the adventure to save the world” specifies François Moreau (Founder and CEO of Reservoir). The handsome officer with the physique of a young pioneer and the iconoclastic scholar with the red beard will be seen in 22 albums, depicting adventures, action and also a certain crazy inventiveness. The author, E.P. Jacobs, who was close to Hergé (creator of Tintin), liked the excessiveness which takes its full dimension in scientific inventions, including the famous Swordfish. Yes, Blake & Mortimer might today be slightly outdated but, really, these stories were fascinating. 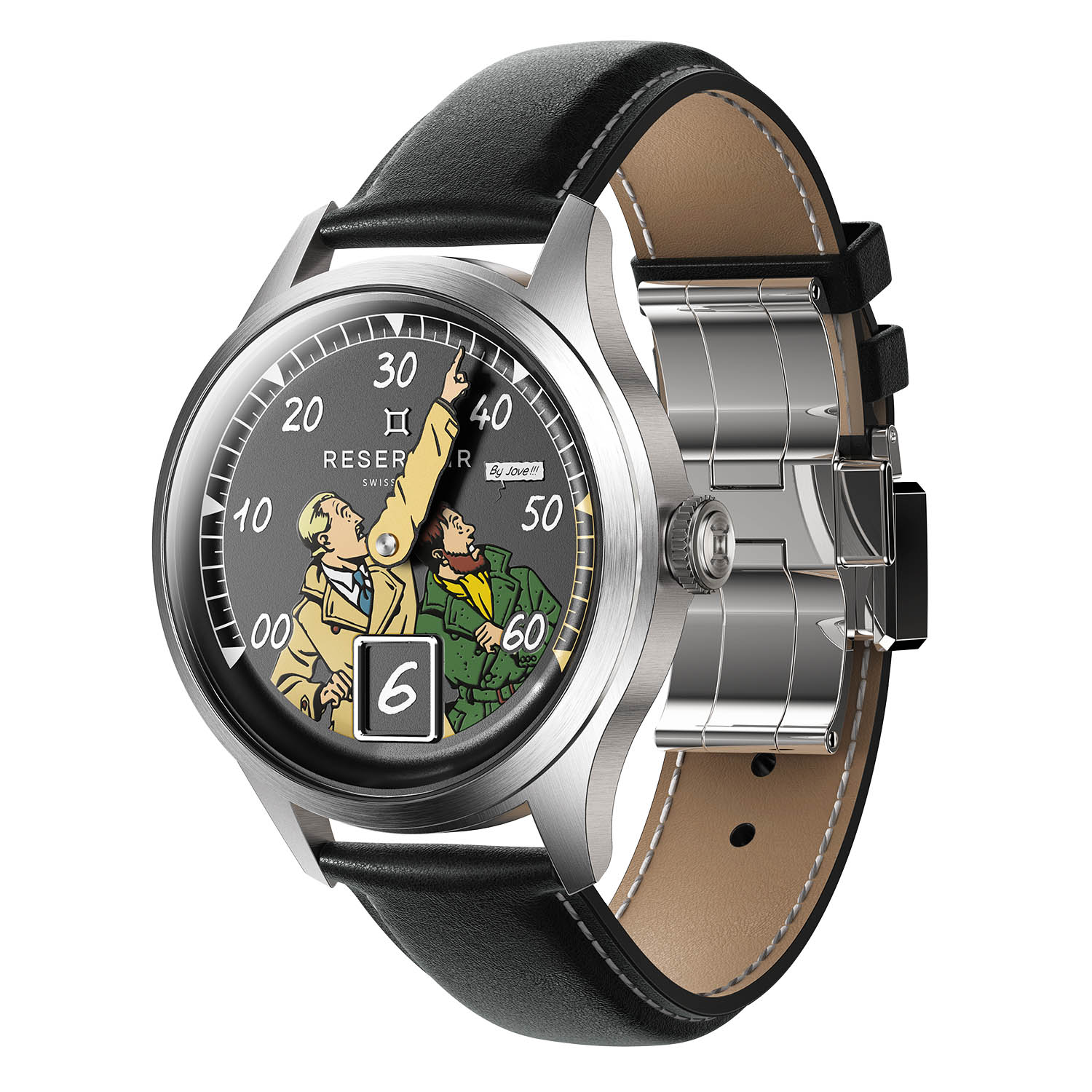 Now, the concept of the character’s watch seems to make a comeback recently, with Genta’s iconic Mickey Mouse watch brought back by Bvlgari recently, a watch that found immediate success. It’s an odd and very bold concept, which will certainly attract only a fraction of the collecting community, but these watches are certainly full of charm. Specifically, there’s something highly attractive when the characters are part of an animation on the dial. And since Reservoir has been built around a proprietary module that displays jumping hours and retrograde minutes, the rest was only about finding the right amount of creativity to make Blake & Mortimer appear on the dial. 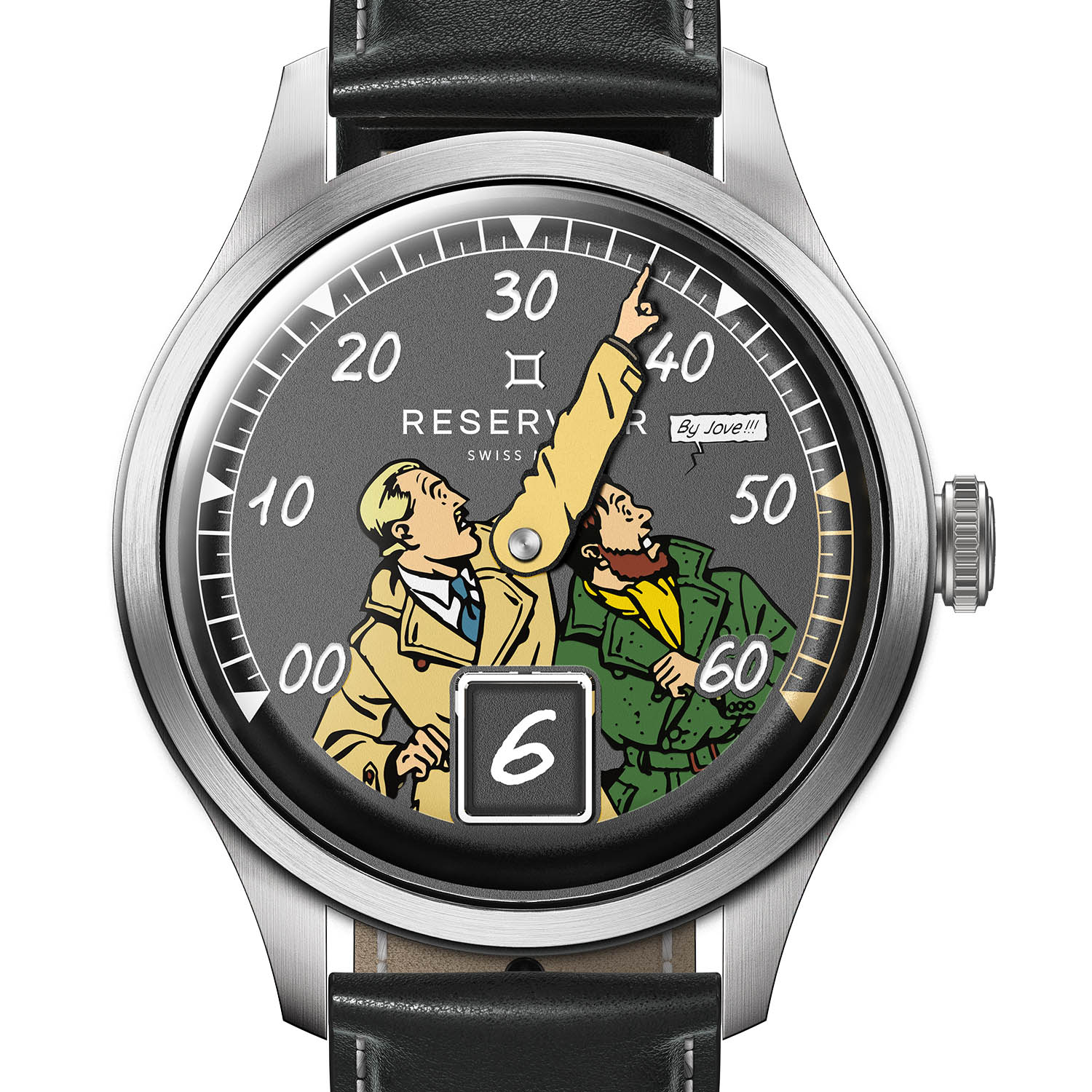 Housed in a steel case of 41.5mm, the Reservoir Blake & Mortimer “By Jove!!!” Edition is all about bringing back the cool flair of the comic on the dial. On top of a matte grained black background, you’ll find the two characters printed with Blake’s arm indicating the passing of time, while at his feet, in a window, the hours pass. To be coherent with the theme, all tracks and markers adopt a comic-like font, produced in high-quality serigraphy and the characters stand out as if in relief on the dial. Finally, in a box on the right, there’s the famous “By Jove!!!” – Mortimer’s favourite expression. 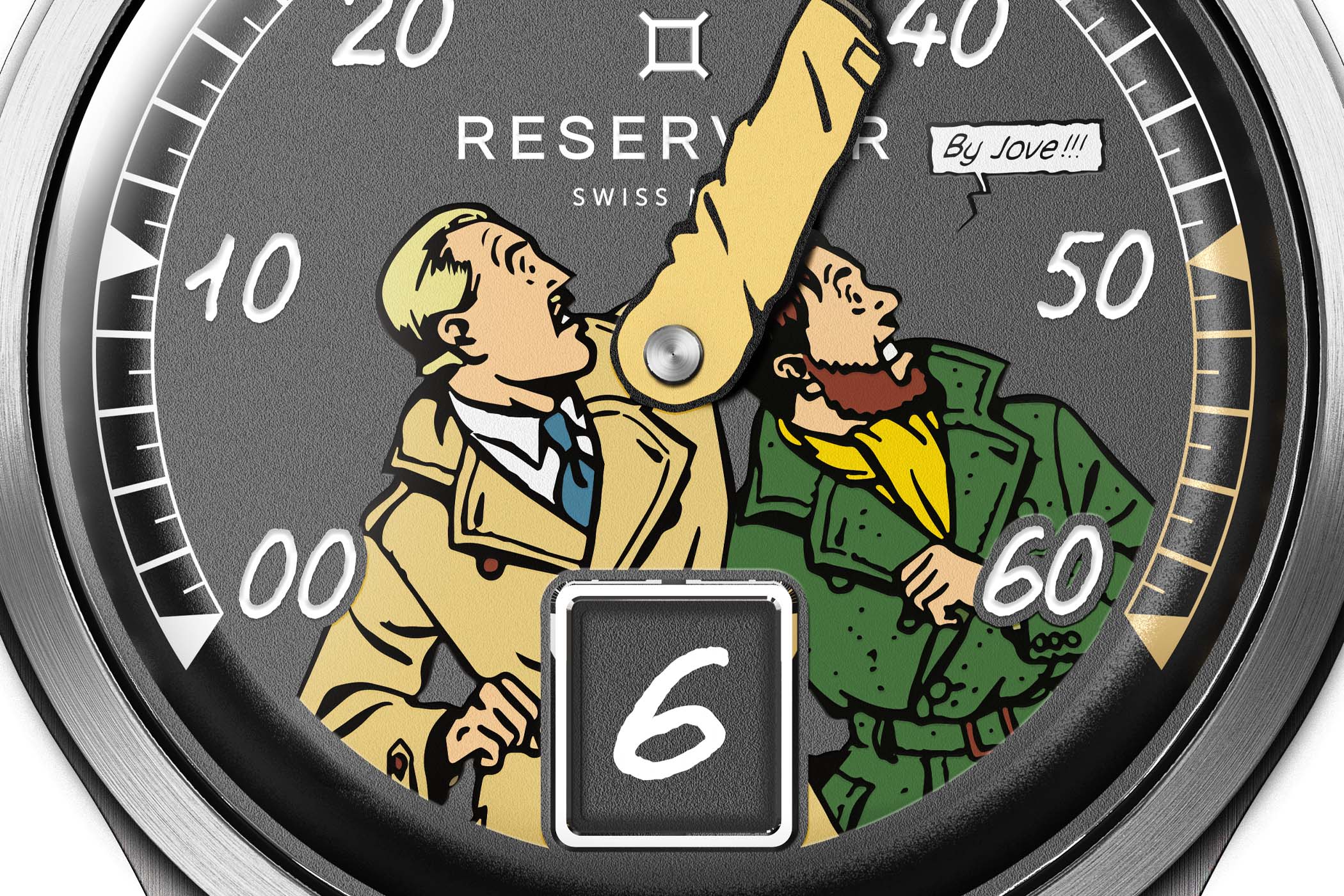 The Reservoir Blake & Mortimer “By Jove!!!” Edition retains all technical specifications of previous Reservoir watches, including the movement composed of an ETA 2824 base with, on top, a proprietary module for the jumping/retrograde display composed of 124 parts. The watch is worn on a black leather strap with triple folding clasp.

The Reservoir Blake & Mortimer “By Jove!!!” is a limited edition of 75 pieces, priced at EUR 2,990. It is now available for orders from the brand’s website and deliveries will start from November 19, 2021, which is the release date of the last opus of the adventures of our two heroes “The Last Swordfish“. For more details and orders, please visit www.reservoir-watch.com.