It takes a certain amount of bravado for a fledgling independent brand to illustrate a press release with a photograph of the movement side of a new product. But there again, we are talking about the brand formed by Gaël Petermann and Florian Bédat, the dynamic duo of talented young watchmakers who took home the Horological Revelation Prize at the 2020 edition of the GPHG for their 1967 Deadbeat Seconds. The latest creation to emerge from their workshop in Renens, Switzerland, marks the second chapter in the life of their 1967 Deadbeat Seconds, now in a titanium case with blue accents on the dial. 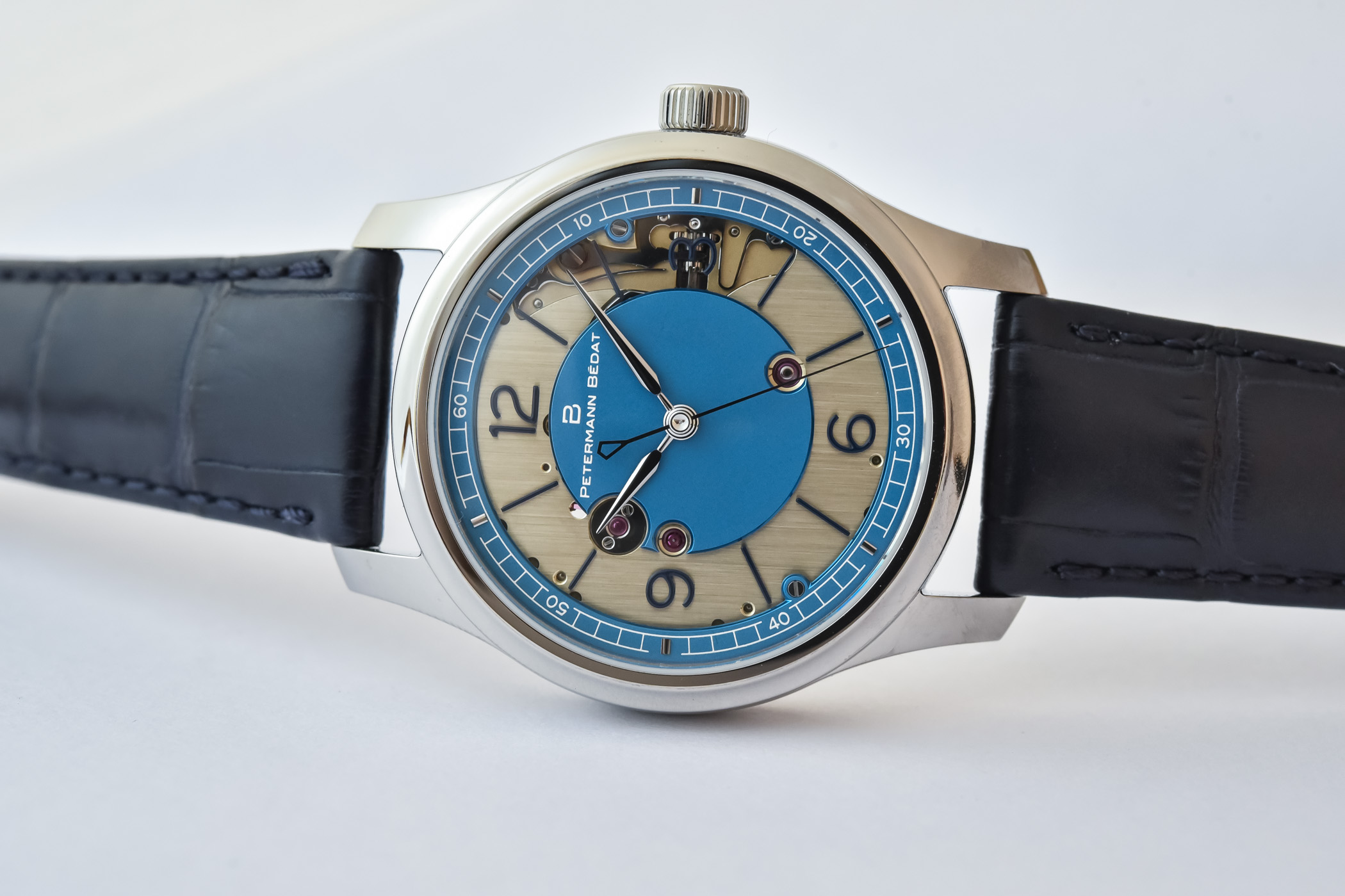 If you thought that the reference to 1967 alludes to the year of birth of the watchmakers, you’d have made the same mistake as many of us. Just shy of 30, Gaël Petermann and Florian Bédat shared a workbench at the watchmaking school of Geneva from 2007-2011. Their ways parted when Petermann went to work for A. Lange & Söhne in Glashütte, and Bédat joined Harry Winston in Geneva. Bédat eventually joined Petermann at Lange and assembled, disassembled and reassembled complications to master the tricks of the trade. Feeling nostalgic, Petermann returned to Switzerland in 2014 and started work restoring vintage and complicated watches. Two years later, Bédat joined him; they set up an atelier in Renens and founded Petermann Bédat Sàrl in 2017.

It so happens that their atelier was next door to Dominque Renaud’s workshop, the co-founder of Renaud & Papi. Acclaimed as one of the best complications manufactures in Switzerland, Renaud & Papi is now owned by Audemars Piguet. In 2017, Renaud asked the young watchmakers to help him with some decoration work, and in exchange, they asked for his help in developing their first movement. Undaunted by challenges, Petermann and Bédat settled on an elaborate complication known as a deadbeat seconds mechanism.

The calibre the two men developed for the 1967 Deadbeat Seconds was inspired by a tourbillon pocket watch with seconde morte made by Robert Gafner, a teacher at the watchmaking school of La Chaux-de-Fonds in the 1940s. Unlike conventional seconds hands that sweep smoothly around the dial, a deadbeat seconds performs a discreet jump at every second. Below, an example of the first series, in an 18k pink gold case.

The reference to 1967 marks the year that the first quartz movement was launched. Obviously, quartz has nothing to do with this watch but the precise staccato beat of a quartz seconds hand is identical to the action of a deadbeat seconds mechanism, allowing for more precision readings of the time. If you’re interested in the workings of deadbeat seconds, don’t miss Xavier’s technical perspective on the complication.

In 2017, Petermann and Bédat felt ready to create their first movement. Naturally, the finishings had to reflect the partners’ high esteem for traditional watchmaking. With help from Dominique Renaud and inspiration from Robert Gafner’s pocket watch, Petermann and Bédat embarked on their manual-winding calibre 171 with deadbeat seconds. The movement relies on a secondary escapement for the deadbeat seconds, which is mounted on the three-quarter plate, and a complex four-armed anchor. Driven by a train of wheels, the train stops and the arrow-shaped anchor releases the spring-loaded deadbeat seconds wheel precisely every second. The four-armed anchor with four pallet jewels was the most complex component and had to be hand-adjusted to one-hundredth of a millimetre. Imagine the difficulties involved to ensure the same level of bevelling throughout and polishing the sharp contours of the arrows! 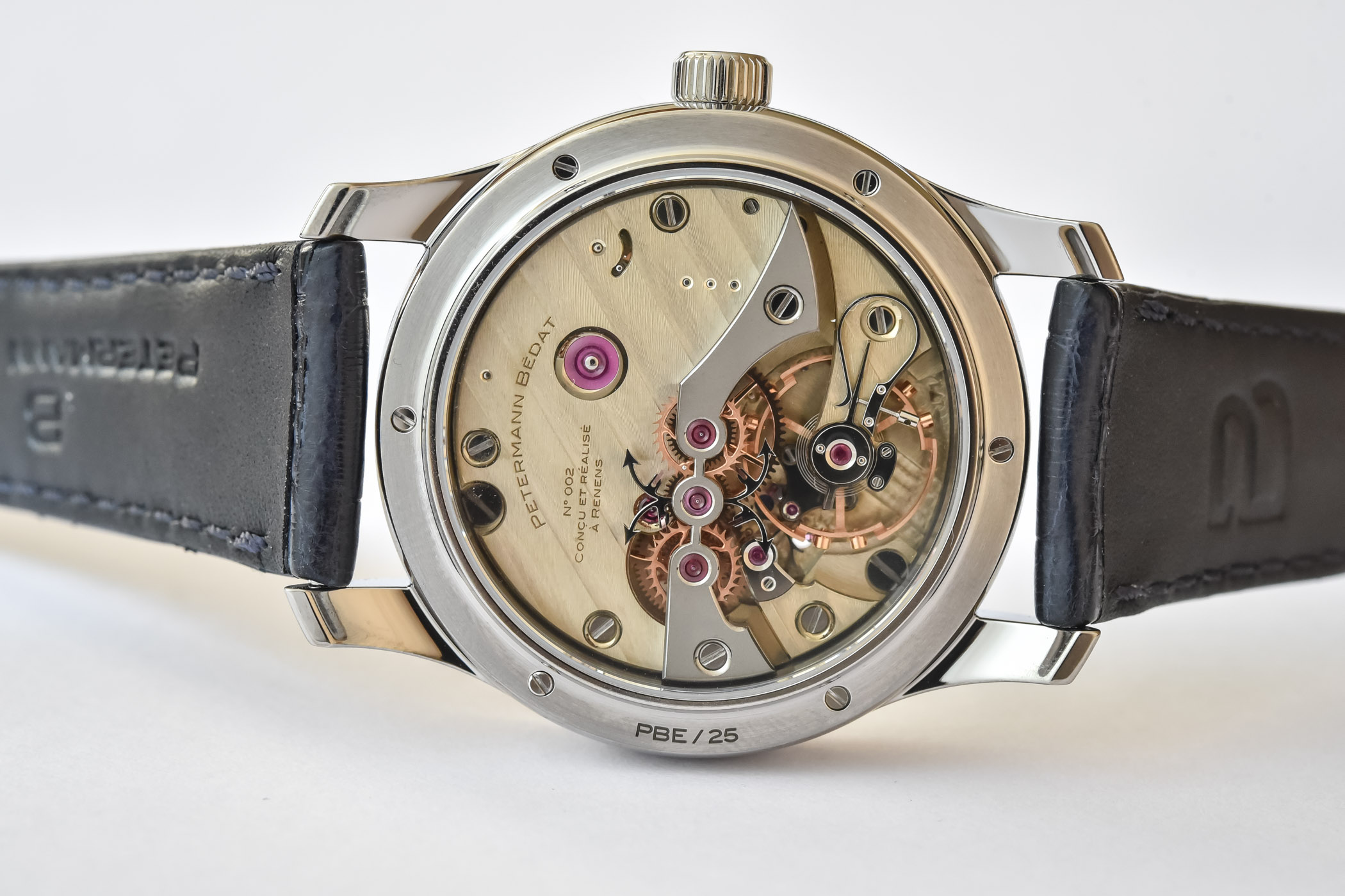 The large balance wheel (11.5mm) beats slowly at 18,000 vibrations per hour and the power reserve – given the large amount of power used to impulse the deadbeat seconds – is a short 36 hours. You can appreciate the Saxon watchmaking influence in the cock with its elegant black polished swan-neck regulator and the untreated German silver three-quarter bridge. Superbly decorated by hand with polished bevels, black polished steel parts and thick Geneva stripes (also made by hand, and you can see the difference…), the movement drew admiration from all quarters. Using an outdated technique by mixing poudre de levant with olive oil, the duo achieved the deep matte finish of the deadbeat seconds bridge. 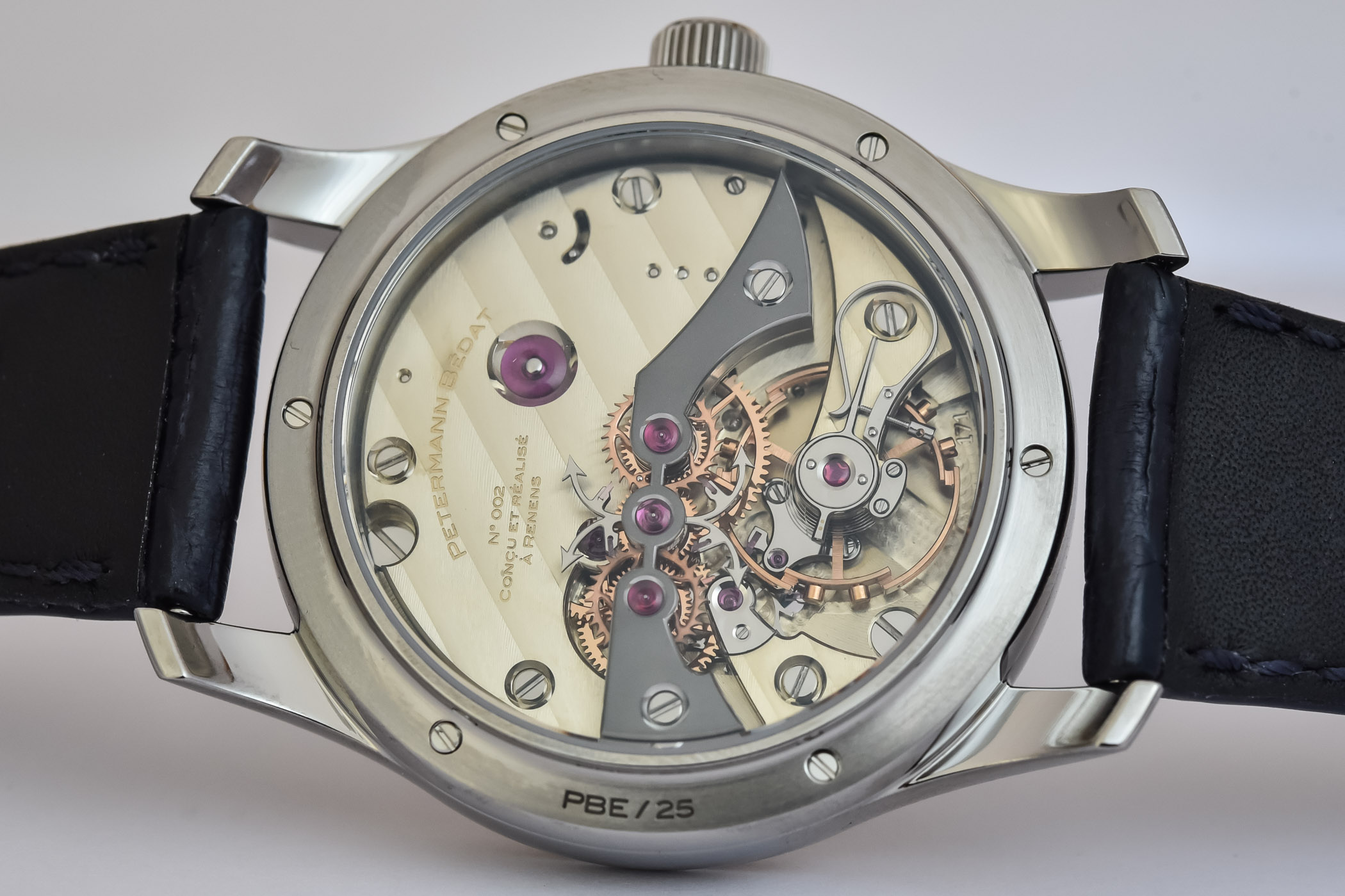 Even though Petermann Bédat’s 1967 Deadbeat seconds prototype was praised for its spectacular movement, the dial was deemed too simple. Instead of trying to redesign a new dial themselves, they turned to designer Barth Nussbaumer who changed the original closed dial with a 1950s-style sector dial with a transparent openworked section between 1 and 4 o’clock, revealing the levers of the keyless works behind the deadbeat seconds. Presented in 39mm rose gold and white gold, the ten pieces of each metal were sold out.

This new edition of the Petermann Bédat 1967 Deadbeat Seconds has the same dimensions as the gold models – 39mm x 10.70mm – but now has a grade 5 titanium case. The watchmaking duo admits they “chose titanium not because it is easy, but because it is hard.” According to Petermann and Bédat, although it takes one and half times more effort to achieve the fine hand bevelling on a titanium case, it is twice as rewarding. The polished curved case sides transition smoothly into the lugs and features an elegant stepped bezel and a large winding crown. 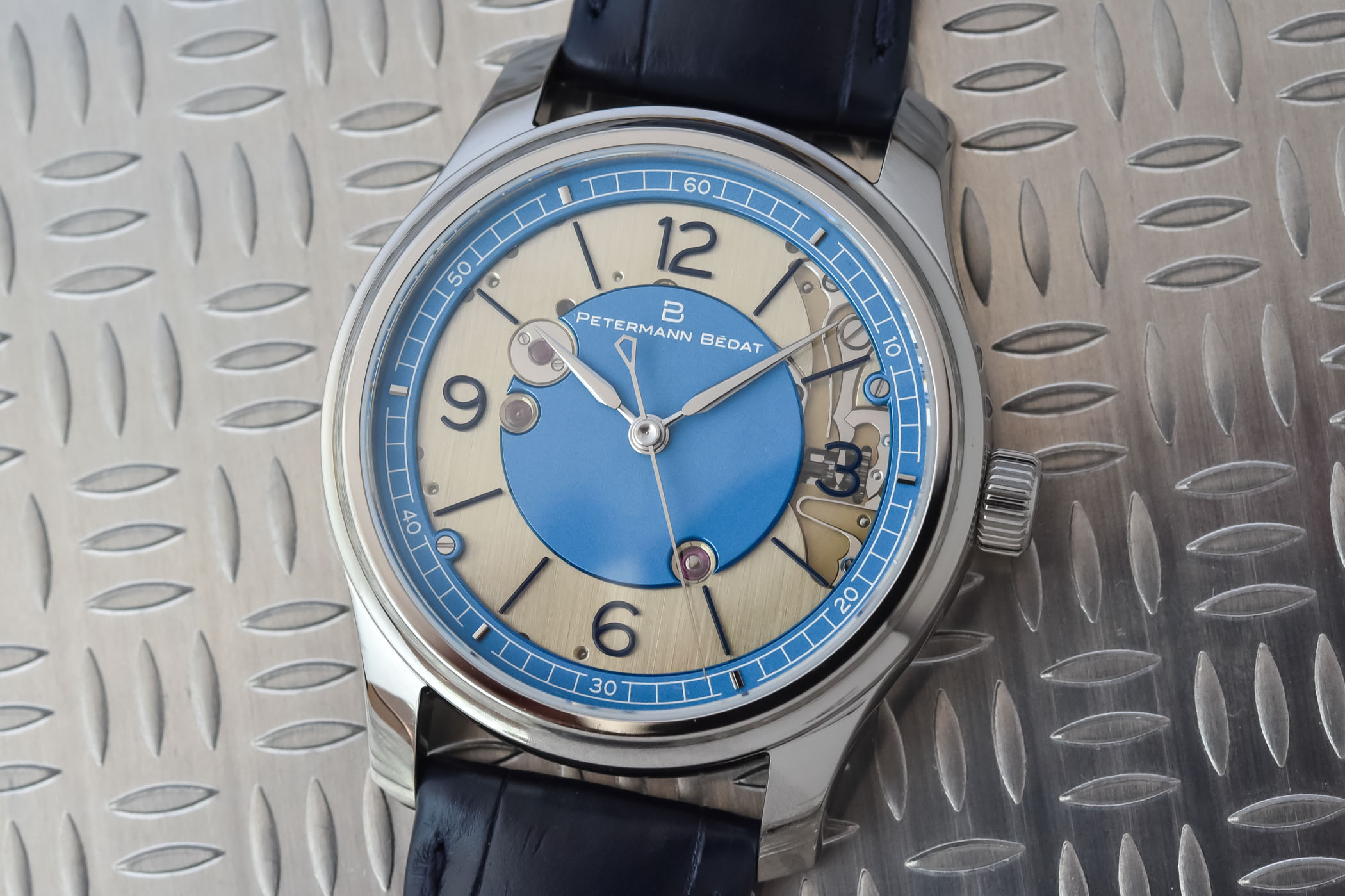 Sharing identical technical specifications and layout to the former editions, the other novelty of the 1967 Second Series is the blue accents on the dial. A beguiling cross between a sector dial with a touch of openworked areas and exposed jewel and sinks, the dial (made by Comblémine) now features a blue central disc and seconds track, which are made of titanium too, with an anodization process to reveal this bright blue colour. Although the peripheral track is also a minutes track, in the context of a deadbeat seconds complication, it is more appropriate to refer to it as a seconds track, indicating the distinct jump of the central seconds hand. Like the earlier editions, the raised central disc and seconds track are sandblasted to create the granular matte surface. 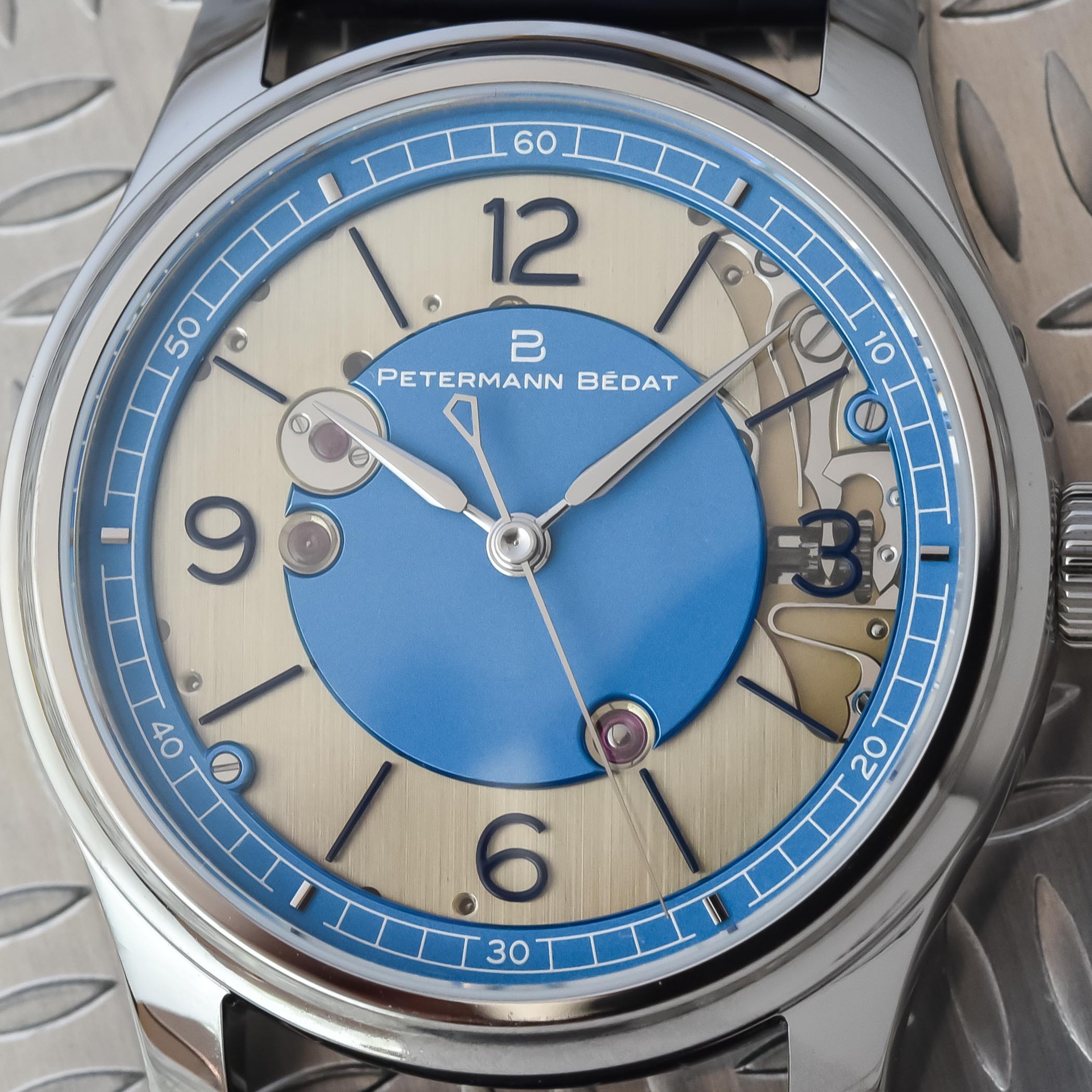 The dial is composed of several layers and features a vertically brushed baseplate with an asymmetrical openworked area covered by sapphire crystal between 1 and 4 o’clock. The base dial has black Arabic numerals at 3, 6, 9 and 12 o’clock interspersed with long black stick markers. The peripheral track is secured to the base plate via two screws and has a white railroad track and small applied markers. What is interesting is that the central blue disc features cut-out areas to accommodate the three large rubies, including the cap jewel with its mirror-polished stainless steel plate and screws. The exquisite bevelled lance-shaped hands are hand finished with mirror-polished surfaces. 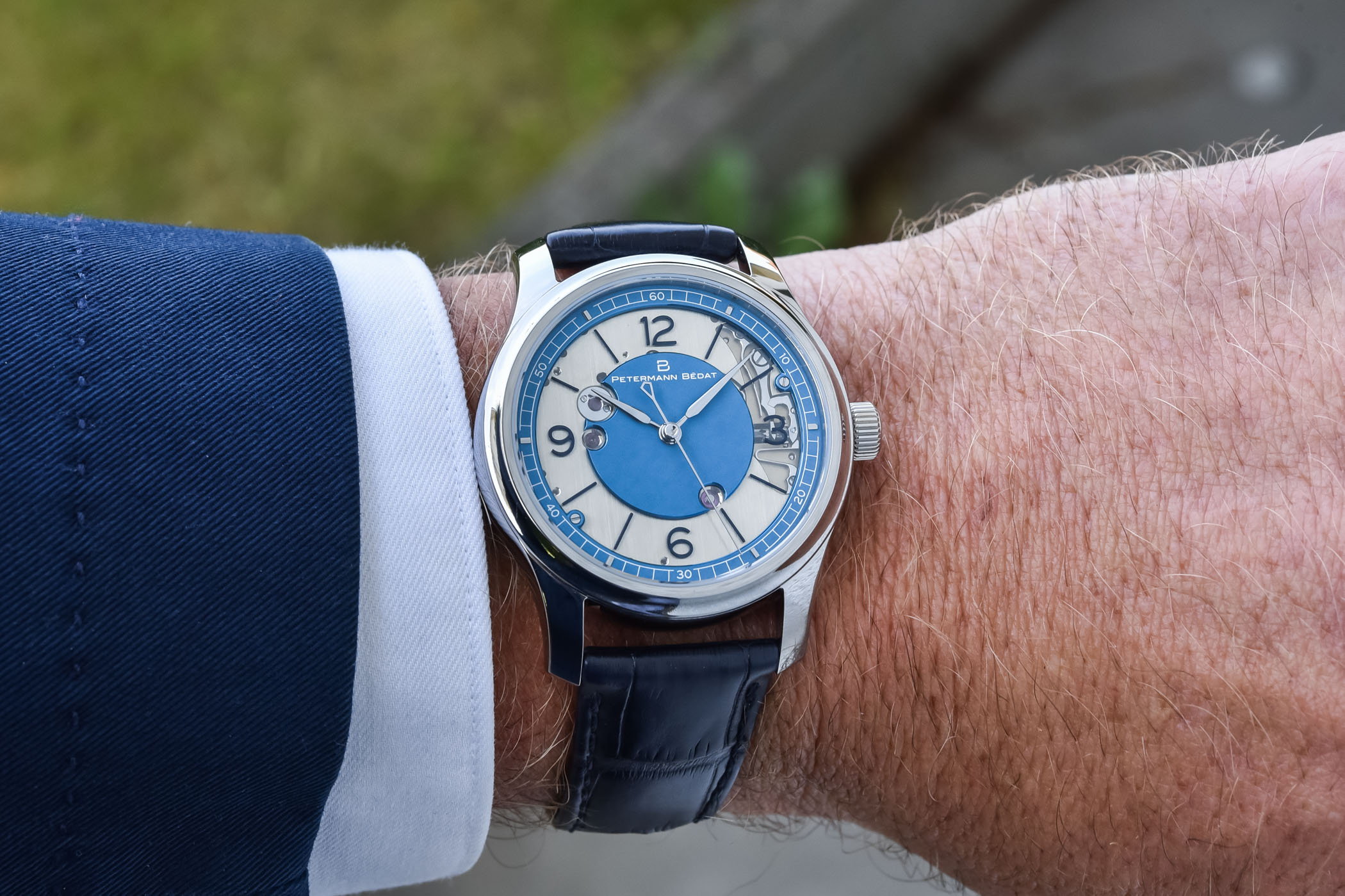 The 1967 Second Series comes with a hand-stitched black alligator strap with a titanium pin buckle. It is limited to 25 pieces and retails for CHF 69,800 (excl. tax).