The new Tonda PF Collection, Parmigiani Fleurier‘s vision of the luxury sports watch, was launched earlier this year to coincide with the brand’s 25th anniversary. Represented by four initial models equipped with some of PF’s most emblematic manufacture movements, there is one watch that towers above the rest in complexity and beauty. The model we are looking at today is the Tonda PF Split Seconds Chronograph, the king of the Tonda PF castle dressed in platinum from head-to-toe. In contrast to the serene majesty of the dial, the movement is the impressive high-end GPHG-awarded calibre PF361 Chronor with mainplate and bridges made of solid rose gold. Read on to discover the multifaceted nature of this stunning newcomer, a limited edition of just 25 pieces.

Parmigiani Fleurier has consolidated an impeccable reputation since 1996 when the Sandoz Family Foundation invited master watchmaker and world-renowned restorer Michel Parmigiani to create his own brand. Since then, the brand has become a fully independent, vertical manufacture capable of producing every part of a watch (regulating organ included), except for the leather straps, which are entrusted to Hermès. With three main collections – Tonda, Kalpa and Toric – Michel Parmigiani’s designs and complications are as sophisticated as they are original.

Although the brand is well known and admired, it has always remained a niche brand. The time was ripe for new blood and a new vision to take it forward. In 2021, Guido Terreni of Bvlgari fame was appointed CEO at Parmigiani Fleurier. In a video interview with MONOCHROME during Geneva Watch Days, Terreni describes his fascinating “immersion into PF’s pure watchmaking culture” and his discovery of Michel Parmigiani’s “infinite knowledge and independent mindset“.

One of Terreni’s first moves was to get PF into the luxury sports watch segment with a solid collection based on the Tonda family, the backbone of PF with its vast range of complications and sub-families. However, there was one overarching quality that had to be respected throughout, and that was Michel Parmigiani’s appreciation of understatement; the collection had to be refined but not ostentatious. According to Terreni, the style of the Tonda PF Collection is pure but extremely detailed, a style he describes as “rich minimalism“. 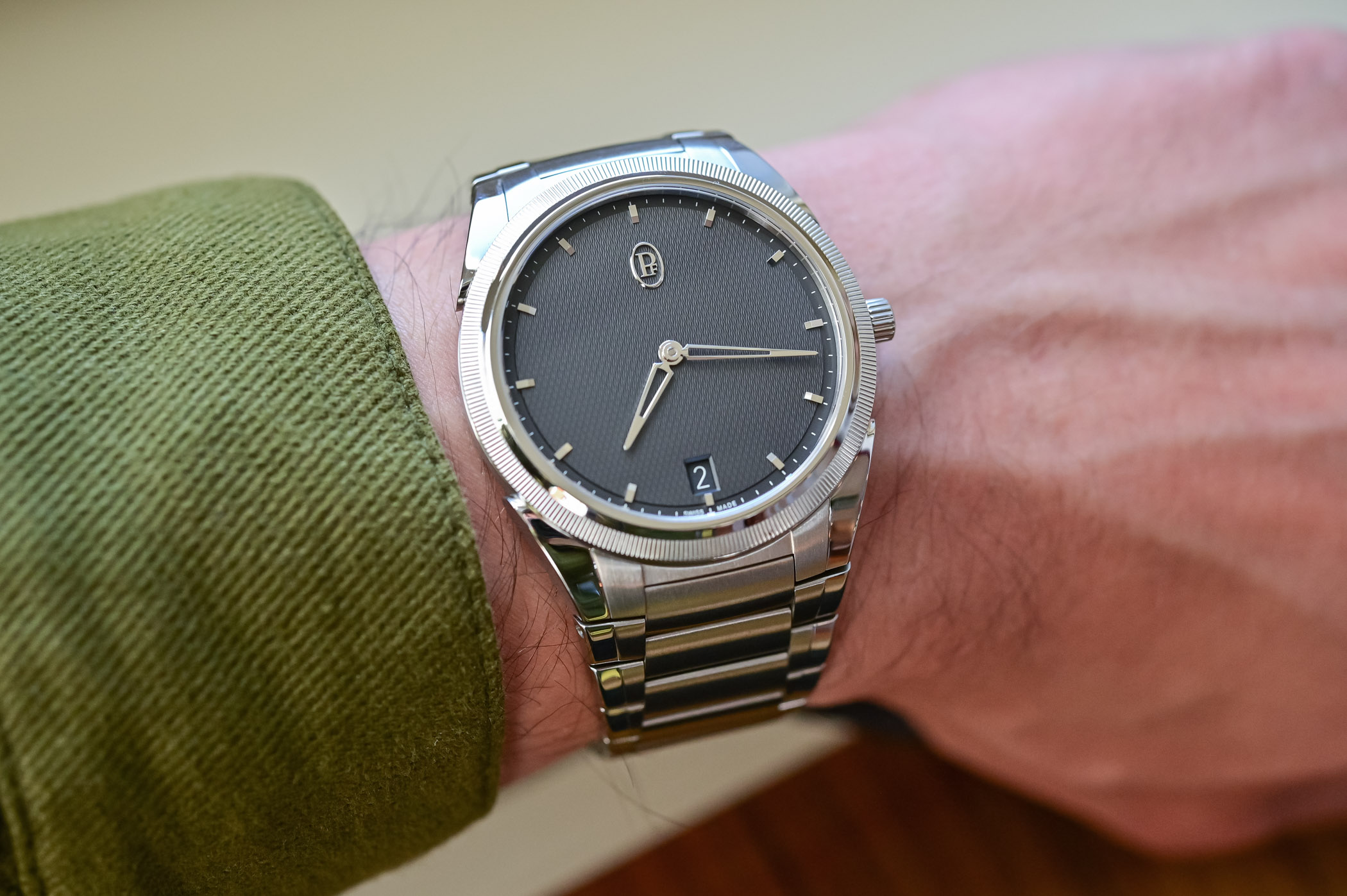 Without getting into the interminable debate of whether or not the Tonda PF Collection qualifies as a luxury sports watch (please read Brice’s in-depth article on this subject), the facts are that it does have an integrated bracelet, it is water-resistant to 100 metres, but it doesn’t imitate the shaped case of a Nautilus or a Royal Oak. Four models – the slim time & date Micro-Rotor model, the high-frequency Chronograph, the Annual Calendar with retrograde date and the Split Seconds Chronograph – marked the debut of the Tonda PF Collection.

His Majesty the Split Seconds Chronograph

The undisputed star of the inaugural collection is the platinum Tonda PF Split Seconds Chronograph, a perfect balance of elegance, sportiness and performance powered by one of the most beautiful rattrapante movements ever created. Entirely sheathed in 950 platinum – case, bracelet and dial – the unique white lustre and heft of platinum give this watch a distinguished yet serene presence. 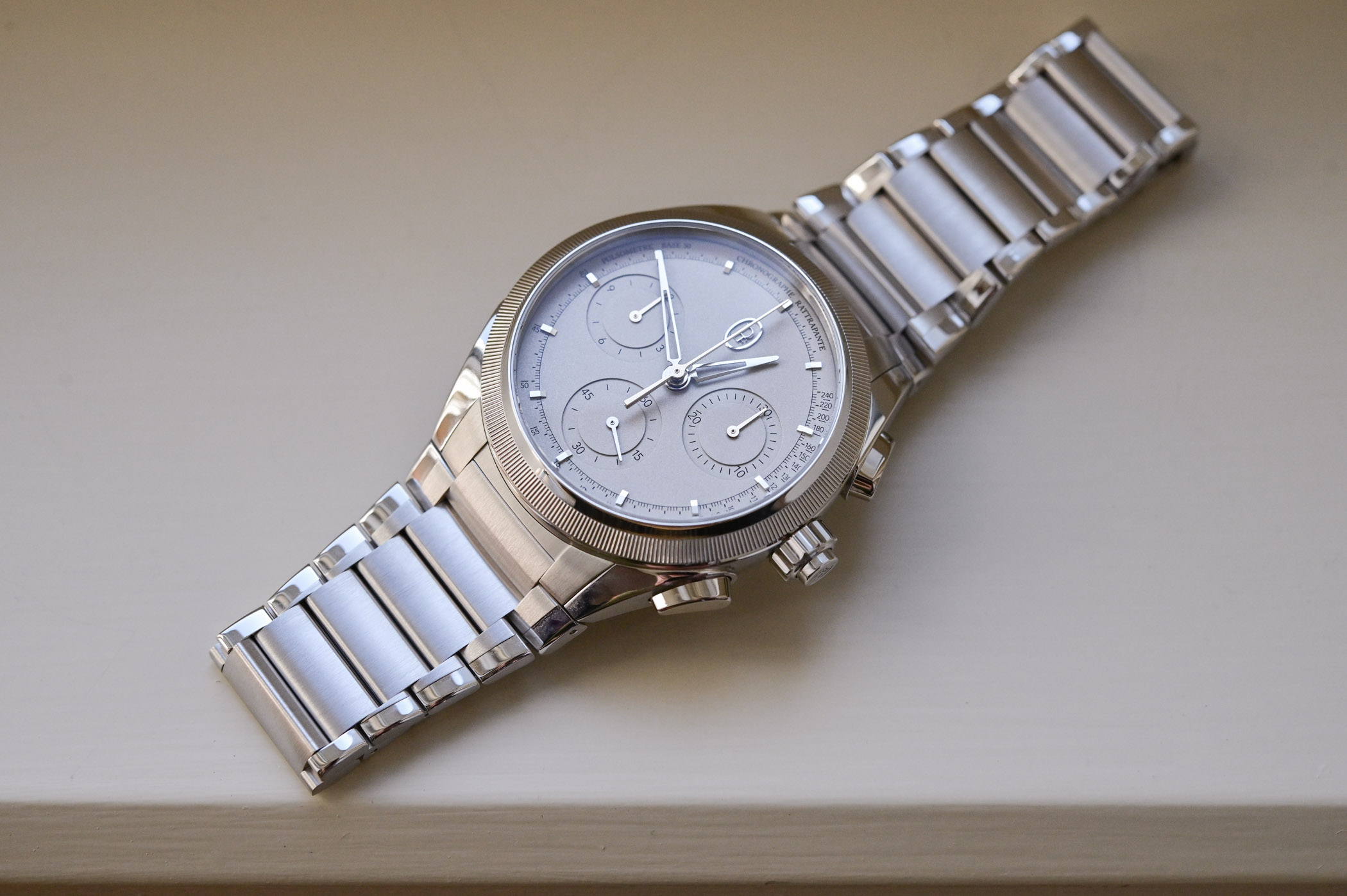 The case has a diameter of 42mm and a height of 15mm, and displays contrasting hand-brushed and hand-polished finishings and the hallmark hand-knurled bezel of many Tonda and Toric watches. You can appreciate how the pushers, crown, lugs and external part of the bracelet feature a bright gleaming polish while the internal links of the bracelet and the casebands are satin-finished. Another hallmark trait of Parmigiani Fleurier watches is the teardrop-shaped pushers to start/stop and reset the chronograph. The third pusher in the crown is to activate the split-seconds function. The crown is screwed-in, and even with sapphire crystal front and back, the water-resistance of the case is a solid 100 metres. As Terreni illustrates in the video, the streamlined platinum bracelet is exceptionally flexible thanks to its ergonomic design and follows the contours of the wrist perfectly. The folding clasp is made of white gold. 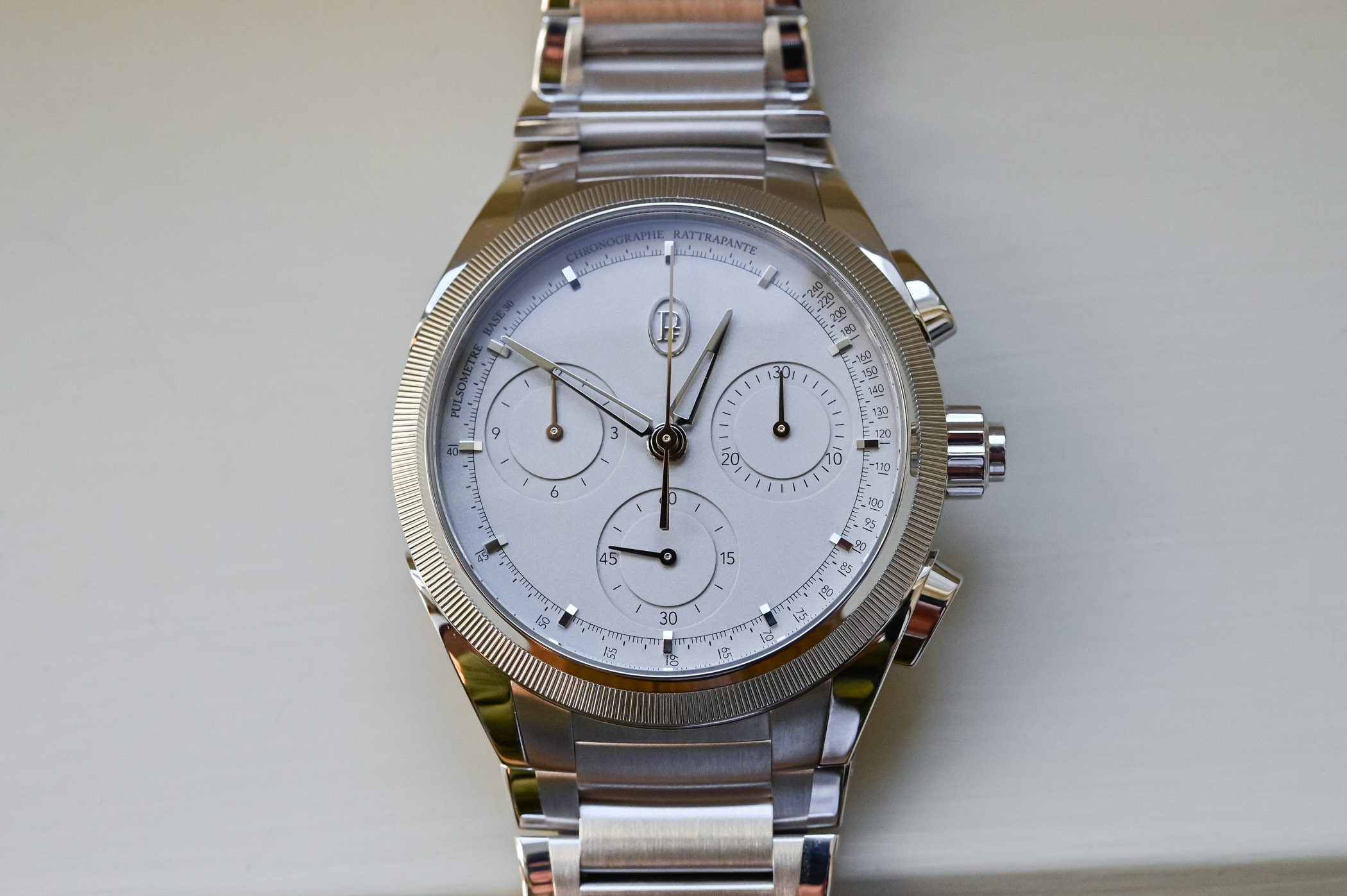 As mentioned earlier, the byword for the collection is understatement, and the dial does the word justice. It might not have the bold luminous displays or contrasting colours we associate with sporty chronographs, but it has a calming, almost regal refinement. Like the case and bracelet, the dial is made of sandblasted platinum to achieve a matte, finely granulated texture. A peripheral pulsometer scale calibrated to 30 heartbeats (or pulsations) is printed in black and hosts twelve small hand-applied rhodium-plated hour markers. The three sub-dials – 30-minutes at 3, running seconds at 6, and 12-hour counter at 9 o’clock – are slightly recessed with simple black markings and Arabic numerals. 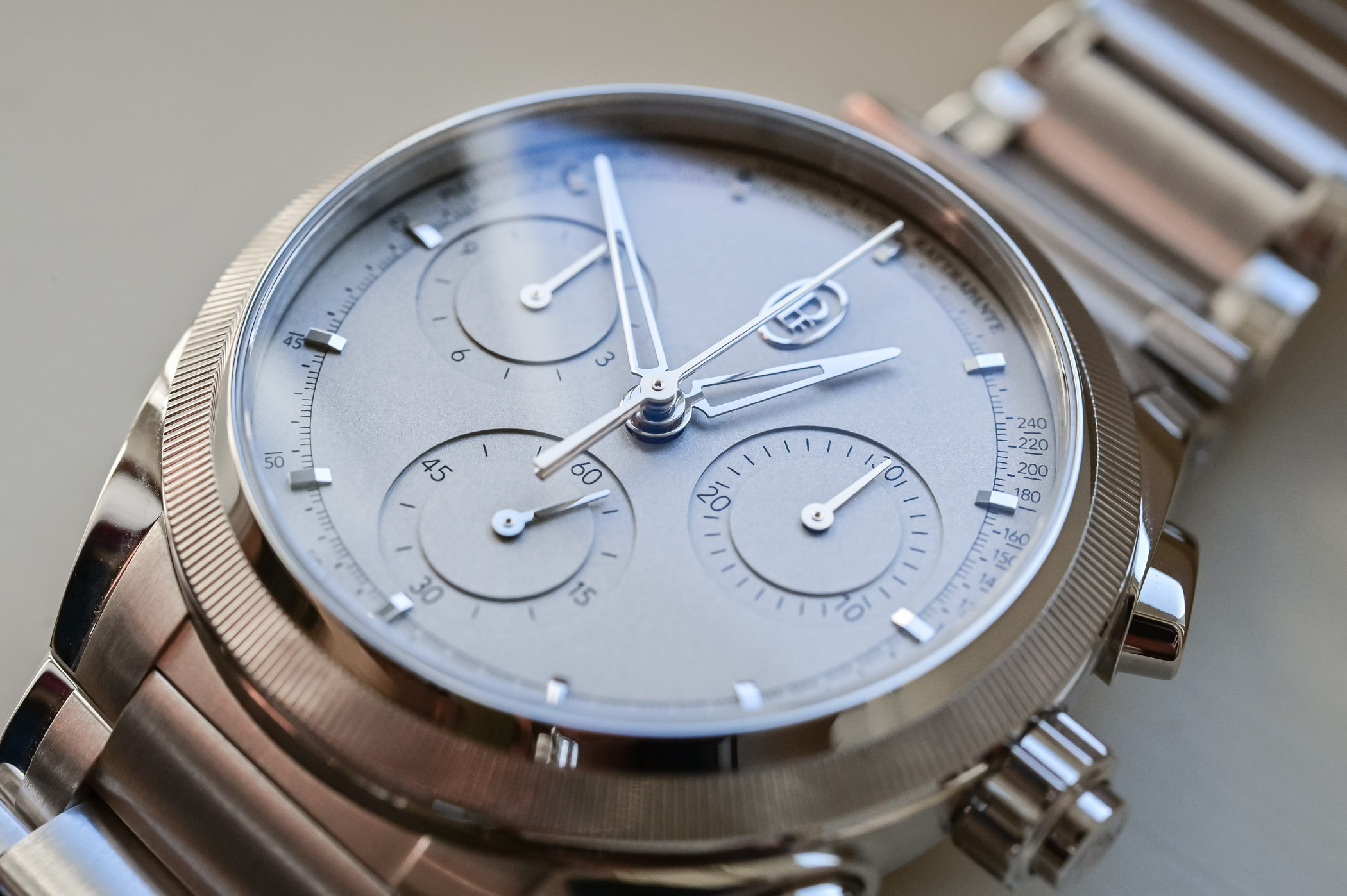 Instead of emblazoning the brand name across the dial, the brand’s initials are housed inside an applied and polished oval cartouche at noon. To distinguish the chronograph functions, the central chronograph hand and the hands of the 30-minute and 12-hour elapsed time counters are plated in rose gold while the rattrapante hand and the small seconds hand are steel and rhodium plated. White gold with rhodium plating is used for skeletonised delta-shaped hour and minute hands.

The calibre PF361 is a new version of the manufacture’s high-end Tonda Chronor Anniversaire, Parmigiani’s first integrated chronograph movement released to celebrate the 20th anniversary of the brand in 2016 and hailed as one of the most spectacular chronograph movements on the market today. Known as the Tonda Chronor (chronograph + or,  French for gold) because of its solid gold bridges and plates, the chronograph won the “Best Chronograph” prize at the prestigious GPHG awards ceremony in 2017. Moreover, as you would expect from PF, it is not a traditional chronograph movement but the most complicated variety of chronograph known as split-seconds or rattrapante. More complex than a perpetual calendar and much more complex than a tourbillon, developing a fully integrated chronograph movement – as opposed to a modular chronograph movement that is grafted on a conventional movement – is a daunting task. The beauty of a split-seconds chronograph is that you can time different events that begin at the same time but do not end at the same time – like for instance laps of a race. With its two superimposed central seconds hands, a rattrapante lets you stop one hand to read an intermediate time while the second hand keeps running. The pusher inside the crown allows the stopped hand to catch up (rattraper) with the moving hand. 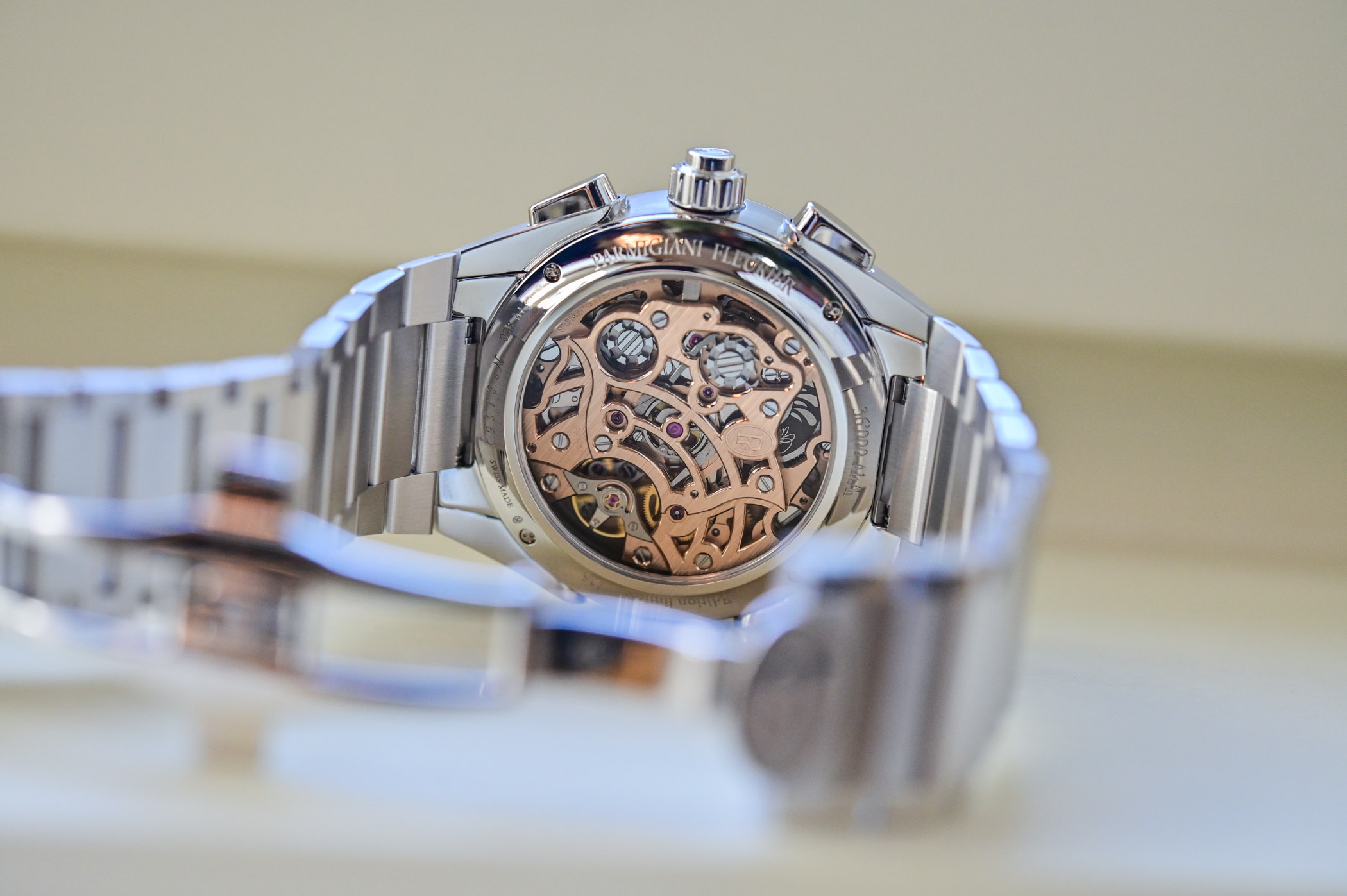 The complexity of developing an in-house integrated chronograph is not just to do with the overwhelming amount of parts – levers, gears, dedicated gear trains for the elapsed times, a mechanism for the pushers and an activation device – but rather the integration and adjustment of the movement. A chronograph, as Brice explains in his article, “relies on kinematics with a chain of actions, each one determining and triggering the next, and each sequence precisely synchronized and adjusted. Even the tiniest imperfection has a knock-on effect, travelling down the line like a series of dominoes, disrupting the entire movement. From the action of pressing a pusher to the start of the second hand of the chronograph, it is a serious amount of parts engaged. All have to be perfectly conceived, assembled and adjusted to perfectly run together”.  Add to this the issue of precision, which can be seriously jeopardised by the incorporation of a second train, and you understand why the development of integrated chronograph movements is limited to a handful of watchmakers.

For enhanced precision, the manual-winding movement runs at a high frequency of 5Hz or 36,000vph, allowing measurements of 1/10th of a second accuracy. Despite the energy consumed by a higher frequency, the calibre PF361 delivers 65 hours of power reserve. 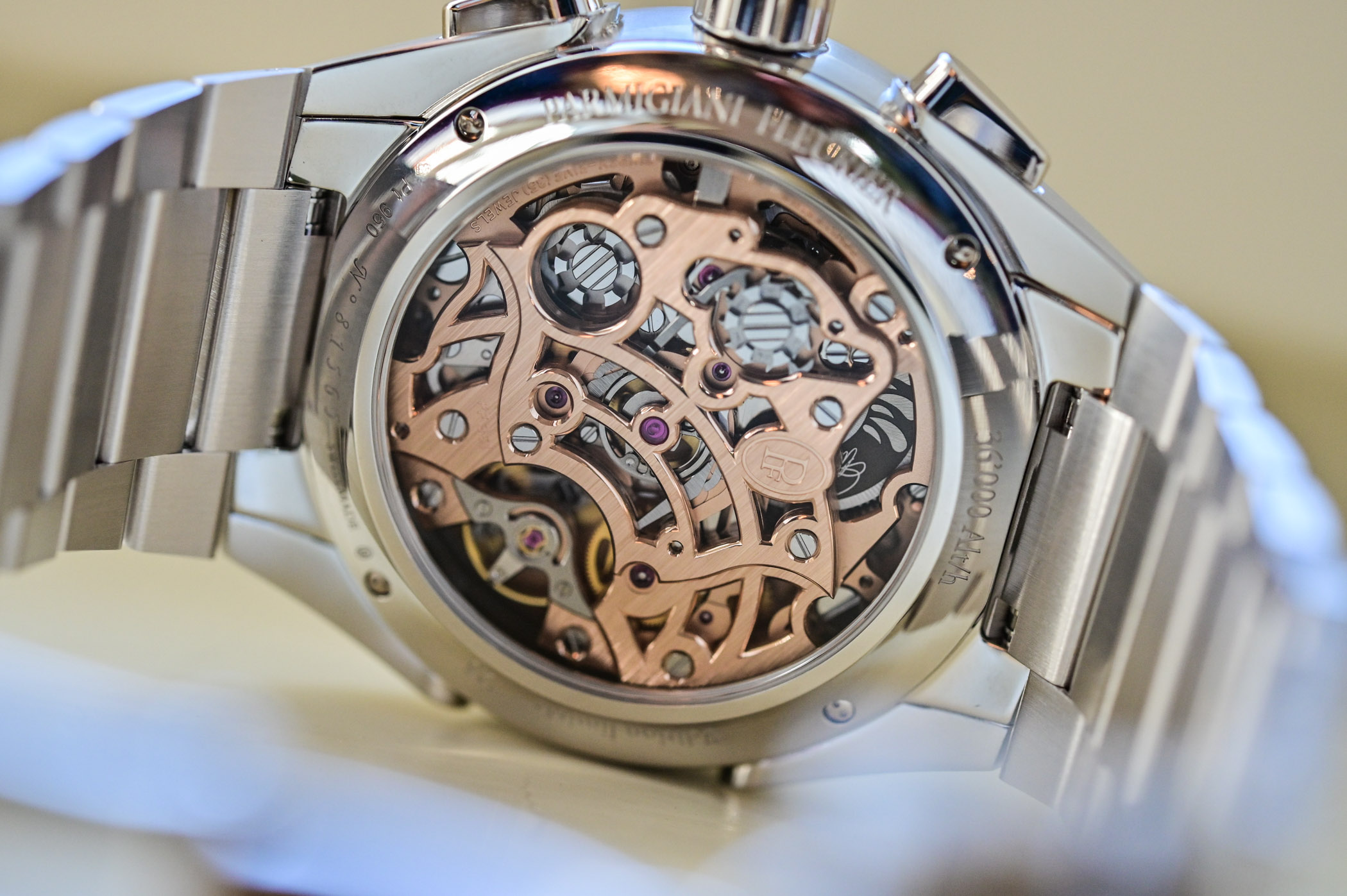 Instead of one column wheel, the Chronor has two column-wheels (the star-shaped pillar command used in the most prestigious chronographs), which are placed at 8 and 10 o’clock on the movement. One is to control the chronograph functions, the other to control the split-seconds function. And instead of a horizontal clutch with teeth to engage and disengage the chronograph that can cause the chronograph seconds hand to jump when the teeth mesh, the Chronor is equipped with a modern vertical clutch to activate the hands smoothly. The balance wheel with adjustment weights is held under a full balance bridge allowing for precise adjustment, and its stable position increases shock resistance.

Having dealt with some of the technicalities of the movement, now it’s time to admire the beautiful landscape formed by the 18k rose gold bridges and mainplate that hold the moving parts in place. Compared to the discretion of the dial, the movement is a smorgasbord of lavish gold bridges, refined finishings and dynamic architecture. The intricate web of curved openworked gold bridges, arranged in different layers, emanates from the centre of the balance wheel. The finishings are top-tier: the bridges display satin-finished surfaces and hand-bevelled and polished edges; the sinks and screw heads are polished; the mainplate is decorated with a frosted finish, and the steel parts are finished with straight graining.

I am well and truly captivated by the beauty and technicality of this watch. The unique lustre and sheen of platinum combined with the restraint exercised on the dial give this watch a refined regal status. Fair enough, the lack of luminescence and colour contrasting areas might not be everybody’s idea of a sporty rattrapante, but the very lack of these elements ennobles the watch and sets it apart from the crowd. The contrast between the discreet dial and opulent movement is ideal for those of you who love mechanical shows but don’t want a circus on the dial. The platinum bracelet is supple and flexible and sits beautifully on the wrist. However, be forewarned: this is a heavy metal watch. The combination of platinum and the incorporation of solid gold in the movement means that this watch is extremely heavy. On the other hand, it is also a big watch (42mm x 15mm), so it will probably gravitate to larger-sized wrists anyway. And I’m sure there are twenty-five wrists out there willing to adapt to the heft. 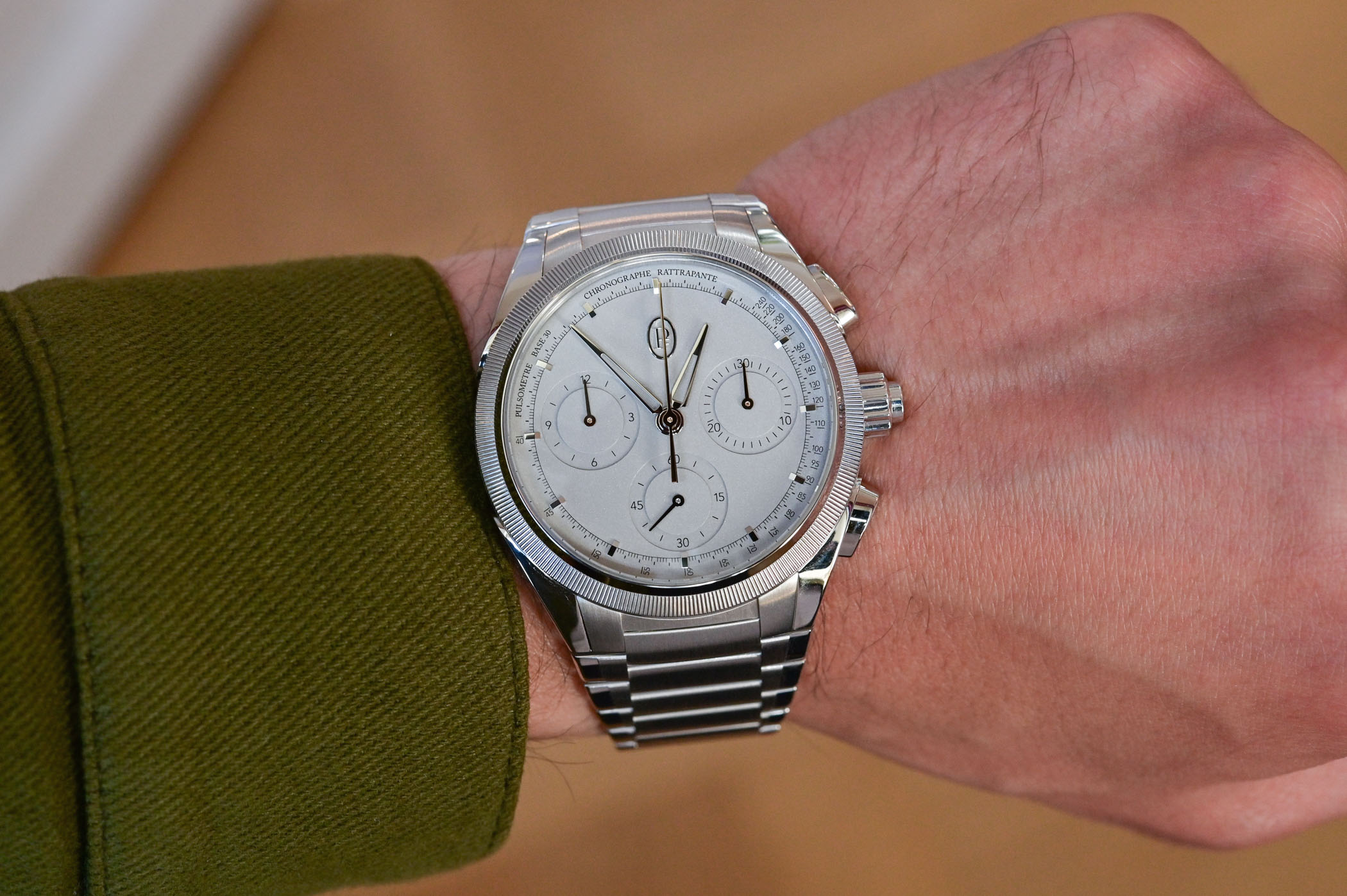